Anachrony,
decide the fate of mankind

There are some games that absorb you to the rest right from the first game. There are such games that after the game is over you want to play another one immediately. There are such games that you can immediately find out that it will be one of your favorite games. It wasn’t like that with Anachrony. We needed time to get to the game and feel its unique atmosphere. At the beginning we were disappointed, love appeared later…. Now we know that the magic Anachrony serves is extraordinary and makes you want to return to the game.

Anachrony takes players into the future, up to the 26th century, to New Earth. It’s a post apocalyptic future in which the vast majority of humanity was destroyed by a cataclysm and the survivors divided into 4 separate groups – each with its own ideology and values. The only thing that unites them is their willingness to survive another, upcoming disaster, in the form of an approaching comet. Humanity divided into 4 Paths (because that’s the name of the factions in the game) prepares for survival, while trying to grow into a new and only leader of humanity. And this is where the game begins.

What the creators serve us from the very beginning delights us. A beautiful, large box with a shiny logo demands to be presented on the shelf. This is undoubtedly one of the most beautiful packagings in our collection and if it wasn’t for the shrinking space on the shelves, it would be displayed. In the box, we will find a whole lot of elements and there is a clash here… If we can’t stick to the quality of materials (these are at a very high level), the visual part can polarize the opinions a bit… And I’ll start with this accusation because later it’s only better 🙂

Players’ charts and main board have in the background beautiful graphics presenting the Earth of the future. On the main board we can see the amazing capital city standing among the debris of the world, and each of the player boards has its own unique design dictated by the characteristics of each of the Path. And here, unfortunately, there is a problem. All these beautiful graphics are as if covered with schematic and not very fine fields used during the game. The artistic part of the game is covered by mechanics and this is not a good impression. Both these elements should harmonize and complement each other. Unfortunately, this is where the artists took the easy way out and did not attempt to integrate both worlds. This impression of schematics is only intensified by the ubiquitous symbols communicating the functions of each field. It is a pity that these symbols are not composed somehow, but simply glued into the middle. This, of course, is very clear, but it has a rather negative impact on immersion (at least at the very beginning;)). The second rather weak element are all the buildings that we can build. These are simply colorful tiles with symbols communicating their functions. So if you’re building power plants, don’t expect at least a snippet of any graphics. It will simply be a yellow square tile with arrows, numbers, and frames. 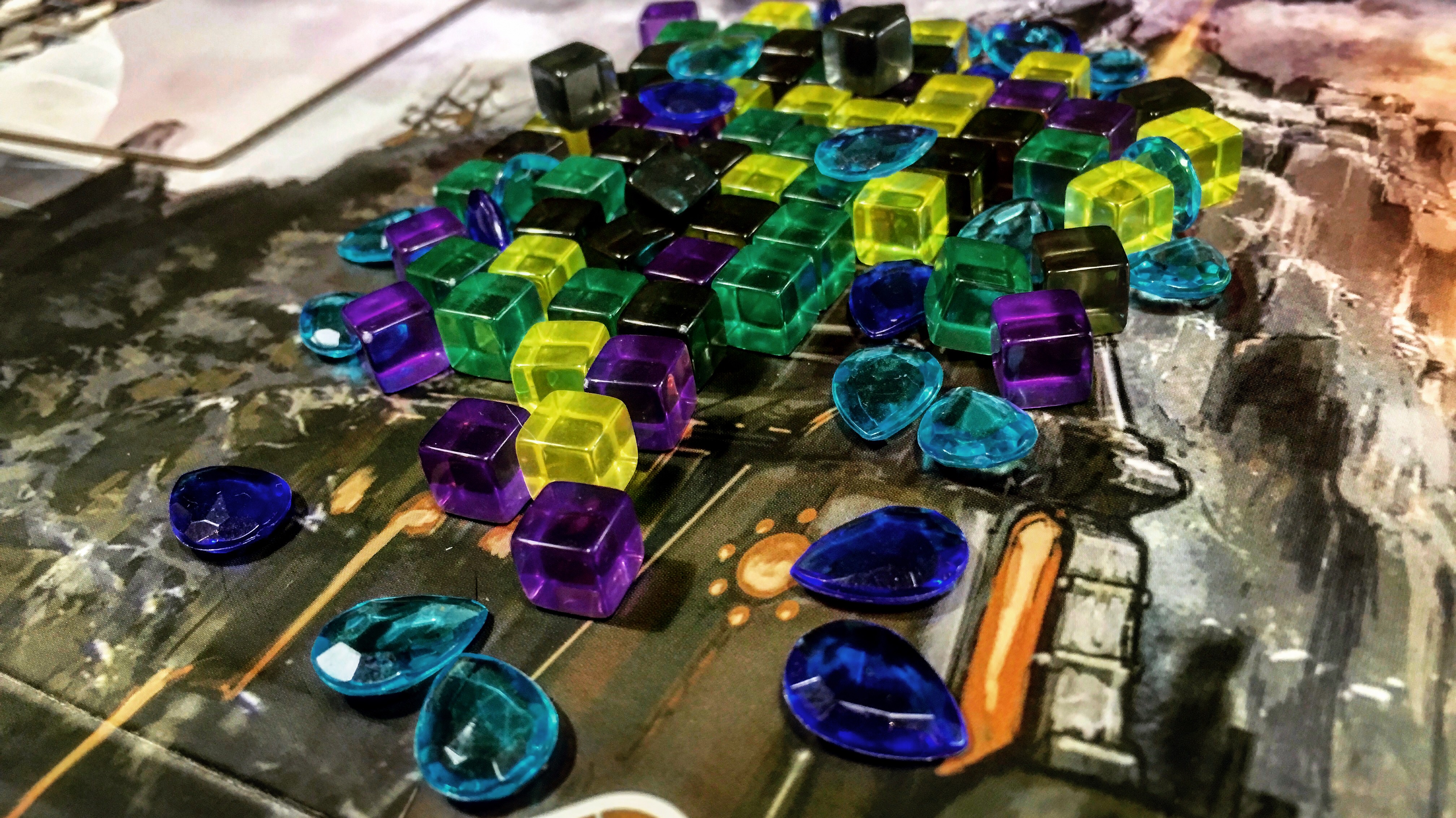 It is also worth mentioning that each of the Pathways has its own dedicated set of different tiles, markers and boards. If we manage to break through the rather clumsy layer of “mechanics” and see the stunning graphics underneath, the game will provide a vision of the amazing Earth from a distant future.

In terms of Anachrony’s development potential, the game can be overwhelming. In a positive sense. At the first game you will surely get nystagmus and feel lost. But don’t worry, what was a weak element in the context of immersion (ubiquitous icons and symbols) is phenomenal in the case of facilitating the game. You can play Anachron almost without reading the instructions. Transparency of all elements of the game is at the highest level. This is the first so complex game we played for the first time, without making any mistakes, only browsing through the instructions.

Anachrony is the essence of the mechanics of worker placement. Each player has his own workers at his disposal, who canb be delegated to various tasks generating resources. There are four types of workers available in the game and each of them is better suited for specific tasks (e.g. Engineers get bonuses for building buildings and obtaining resources, and scientists can discover new technologies).

Players can delegate their workers to work in buildings in their own city, which is rather not burdened with any additional costs. Leaving the city, however, is a completely different matter – in this case the workers must be placed in exosuits to survive on the destroyed Earth. There, workers can work in mines, trade with nomads, recruit new workers, invent new technologies and build new buildings. 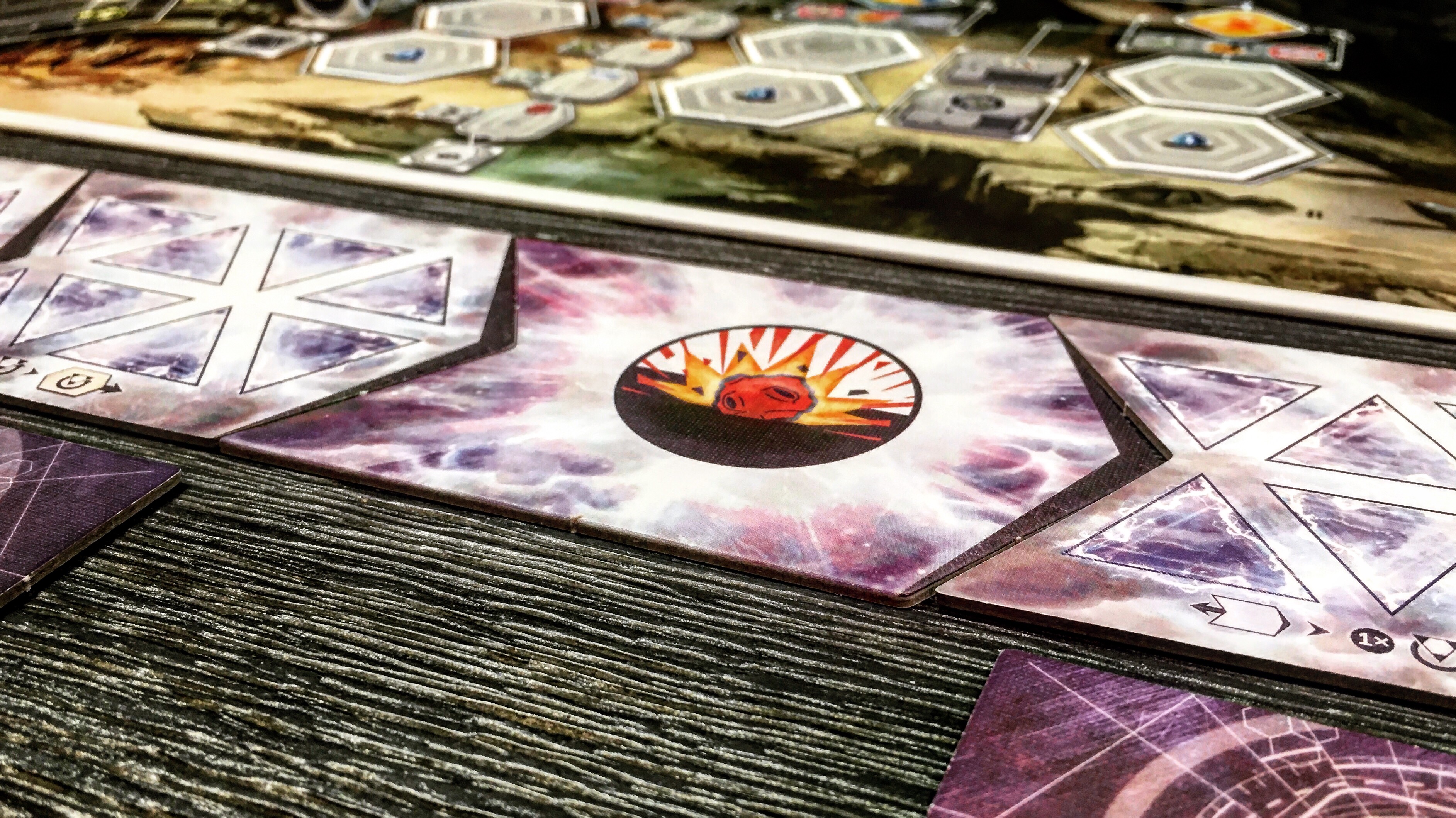 Of course, that’s not all… We have more:

I am going to briefly discuss each one of these mechanics: 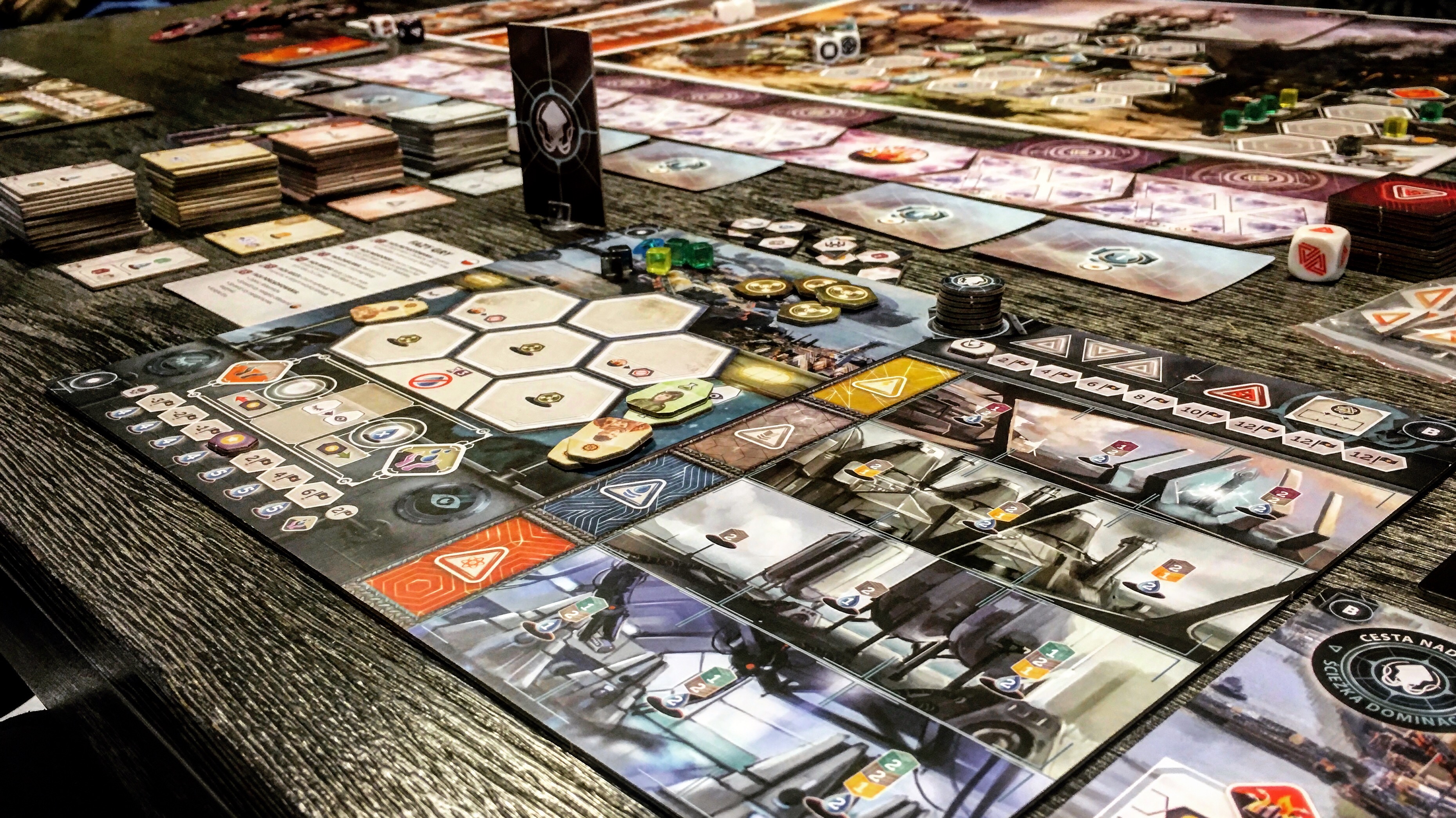 Players choose the Path, get all the necessary tokens (dedicated to each Path), choose the leader and the version of the board. One side is symmetrical, the other asymmetrical which emphasizes the advantages and disadvantages of each faction.

The gameplay is divided into 7 eras, which, following each other, form a time axis. Players must make the best use of their remaining time and prepare for the upcoming comet. In each era, players alternate one action at a time until they all pass. Then time moves on to the inexorable apocalypse and a new era begins. The game ends after the 7th era.

Unfortunately, people who like to compete and have control over the progress of each opponent will have a big problem. A lot of points are counted only at the end of the game so we don’t know how we and our opponents are doing. We can predict and guess, but unfortunately do not expect a track where you can clearly see who is first. The assumption is simple: play your best and don’t compare yourself with others!

I think we can honestly say that there’s no interaction in Anachron. The only interaction is “stealing” the action fields on the main board, but it is also quite doubtful, because most actions are assigned to at least 2 fields (one is simply free, and the other has to incur an additional cost), which makes us rather manage to do what we planned. 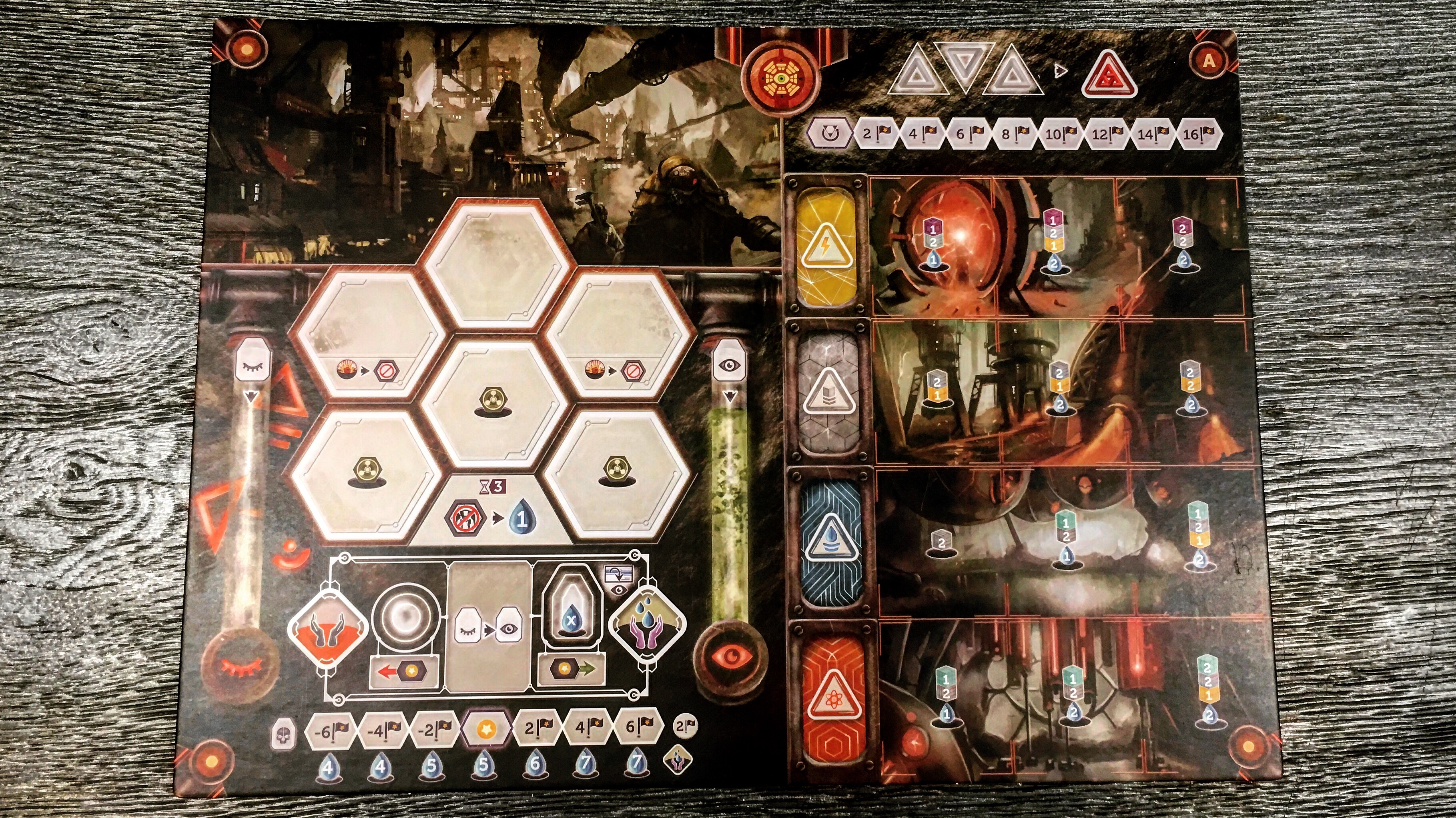 The vast majority of game elements are drawn randomly during the set-up and do not change during the game. There is a lot of it, which allows for a lot of differentiation in the game.

Between one era and another, only resources and workers are randomly replenished. However, these elements will not interfere with your plans somehow (you can always use time travel to get the missing resources, right?;)).

The multitude of possibilities makes it seem as if every game in Anachron is different and unique. Surely this is not a game in which after a few games you will find your “perfect strategy” allowing you to always win. 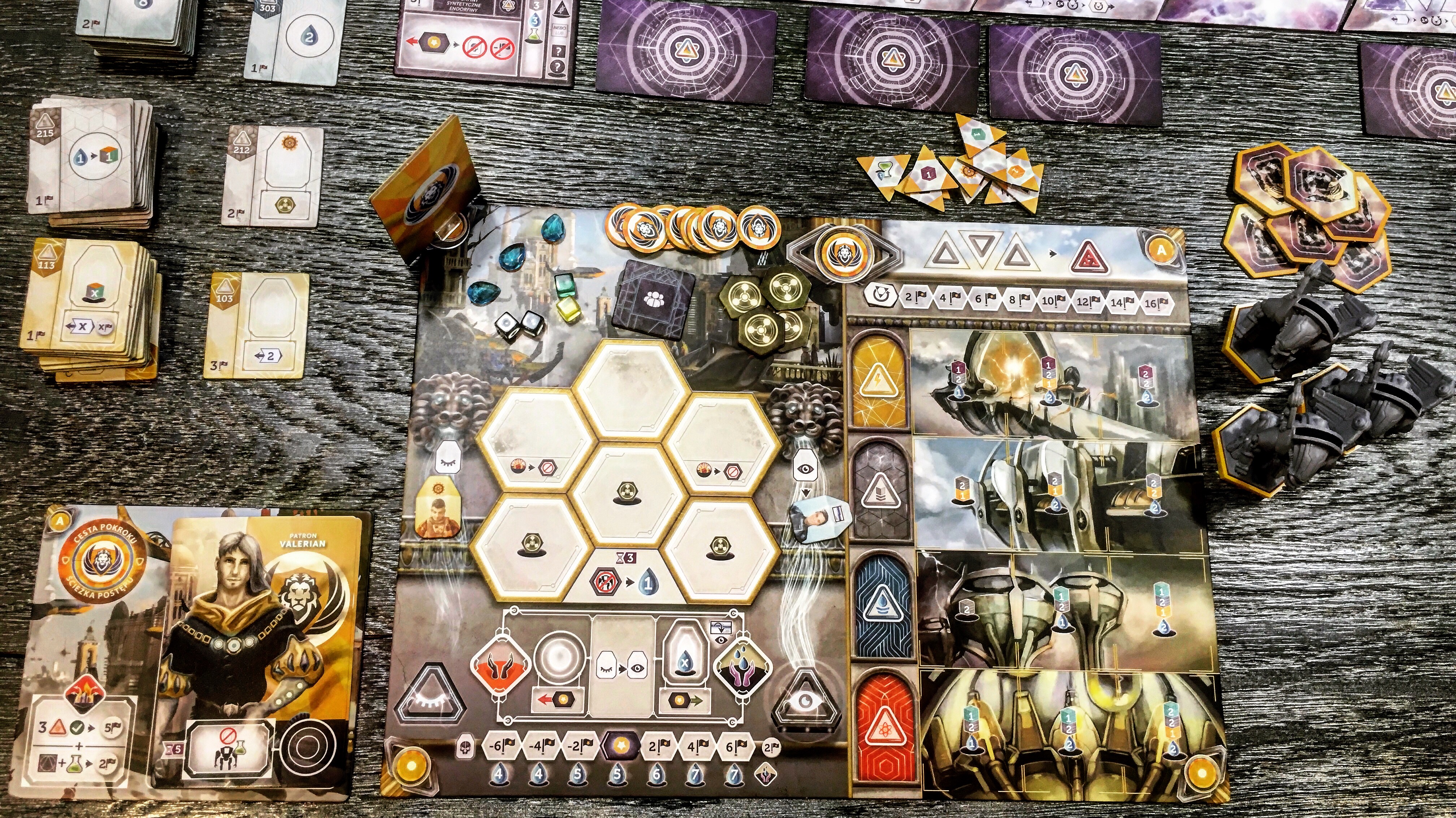 This is an element that is difficult to evaluate due to the way the game is played. Beautiful graphics, approaching comet, running out of time, appearing anomalies… All these elements are undoubtedly the great advantages of Anachrony and helps with immersion. Unfortunately, I am a person who pays a lot of attention to the artistic element and here I have a little clash. The Paths and their leaders are a bit unspecified, there are no fluff, at least two paragraphs of fluff text that would characterize the factions and their leaders. We can read about them a little in the manual and nothing else.

Moreover, I am tiny disappointed by these schematic drawings of action fields and ubiquitous iconography. At times I forgot that I am in the si-fi world, that I am on Earth in the future. Fields covering graphics reduced me to reality and made me feel like I was just playing solitaire. Maybe there are some of you who will appreciate this element and it will not disturb you. For me it’s a small minus.

QUOTE: From David: Can’t totally agree with that, I believe creators done everything they could to have both beautiful art and visible elements essential to smooth gameplay. 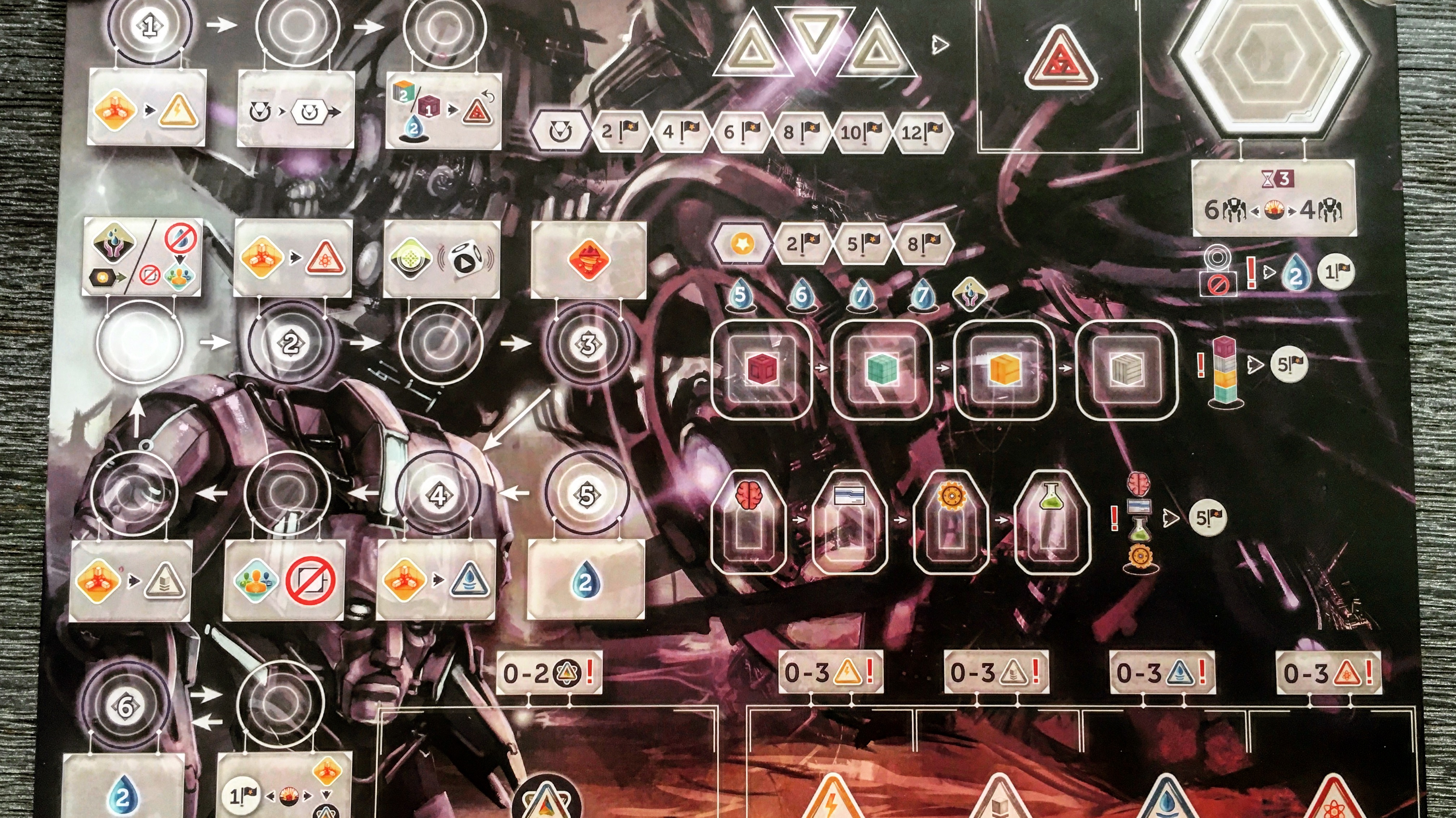 And here is the element that made us not to fall in love with Anachron right away. The first game was difficult, I couldn’t feel the world, I could only see the action fields, symbols, water droplets and images of workers. Only action fields and icons, nothing else… It wasn’t a great game…

Fortunately, with the next games I started to appreciate how the game looks like, I found beauty in these not very subtle symbols 🙂

Now I can confidently say that the game in Anachron is unique. The game contains unique mechanics, which give a lot of fun. And most of all: a multitude of possibilities for development! This is the power of this game! If you are a person who loves to plan, manage, combine and develop your city – you will fall in love.

Unfortunately, the game fun will not have people who bet on competition and interaction. This is simply not here.

The price is relatively high, but the quality of the elements does not raise even the slightest doubts. The number of components is huge also. You will not feel cheated 🙂 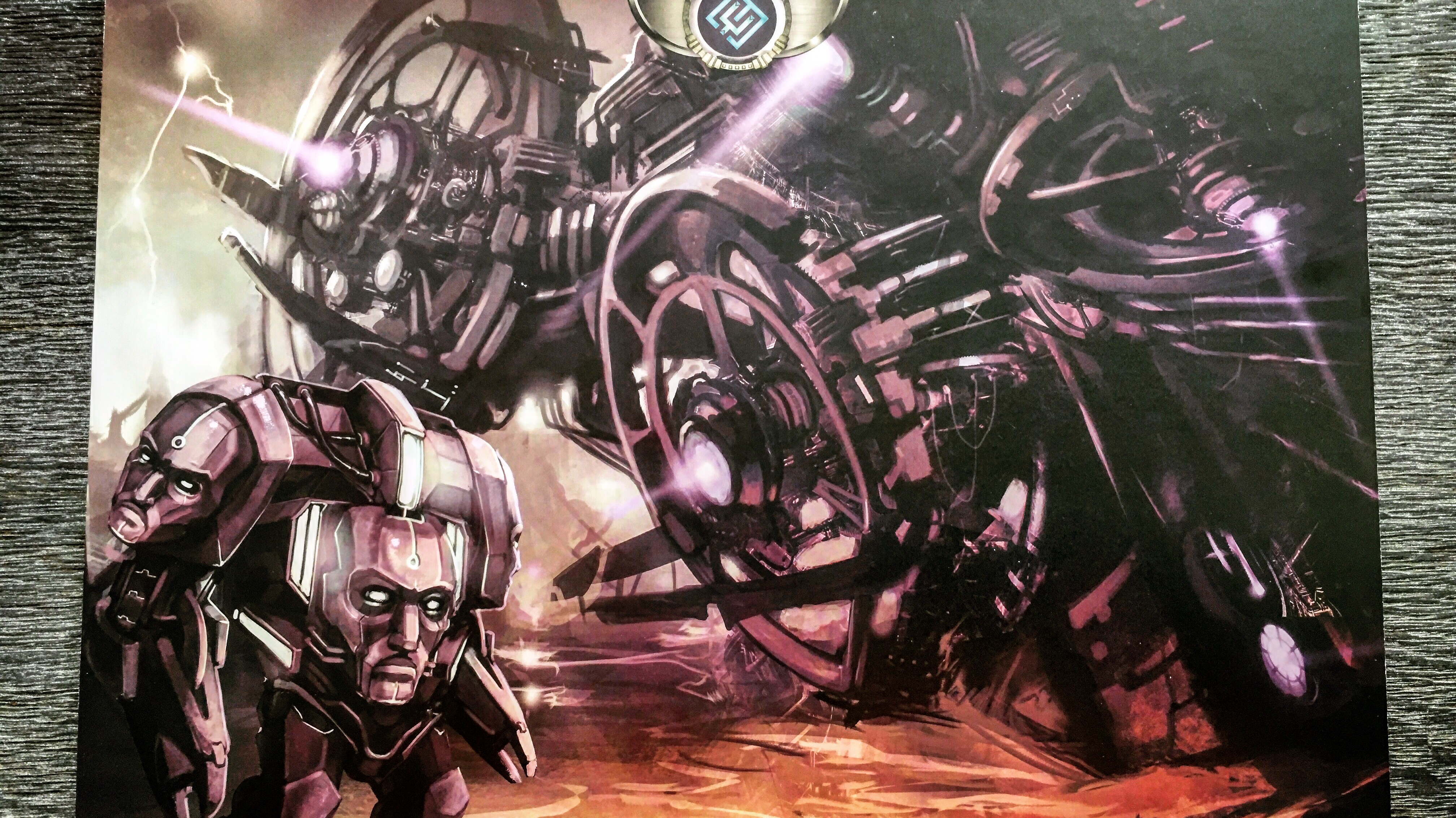 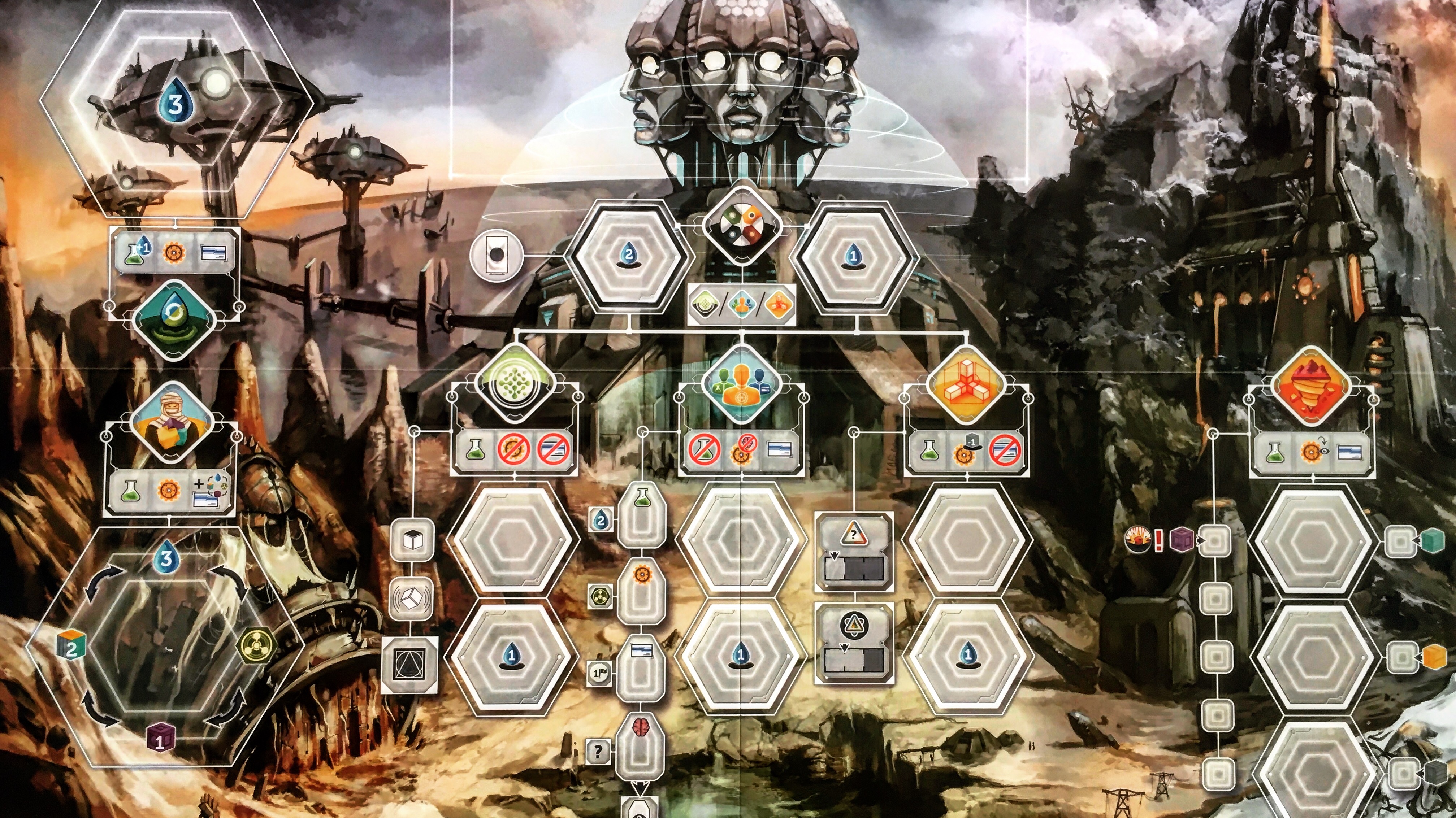 Anachrony is not a game for everyone. For worker-placement fans, managers and builders it is a must have game. Simply put.  Competitive and interactive people… well, I don’t think this game is for you. We love Anachrony and, as I said before, the first play wasn’t very mindblowing. This shows that it is worth giving the game a chance.

Finally, I would like to add that Anachron offers Exosuit Commander, which introduces phenomenal exoskeleton figurines and two new modules. Will be described in a separate text 😉