Gaia Project,
time to settle down in space

We’ve been thinking about buying the Gaia Project for a long time. We were frightened by the level of complexity of the game and the photos showing the game. There’s no point in fooling ourselves – it looked terrible on them. The impulse to buy was the information about the complete sould out of print run and zero plans for reprint. Finally I came across a great promotion in the store and Project Gaja two days later was in home Today I can confidently say that this is one of our favorite games.

The creators did not tempt themselves here with a poetic settling of the world. We have here the galaxy of Terra Mystica and the factions that are trying to dominate this galaxy. However, they will not gain this domination by force, but by expansion, settling the planets, developing institutions and technologies. The Gaia Project is therefore definitely a si-fi game with a much more macro perspective (galaxy) than micro perspective (one planet). 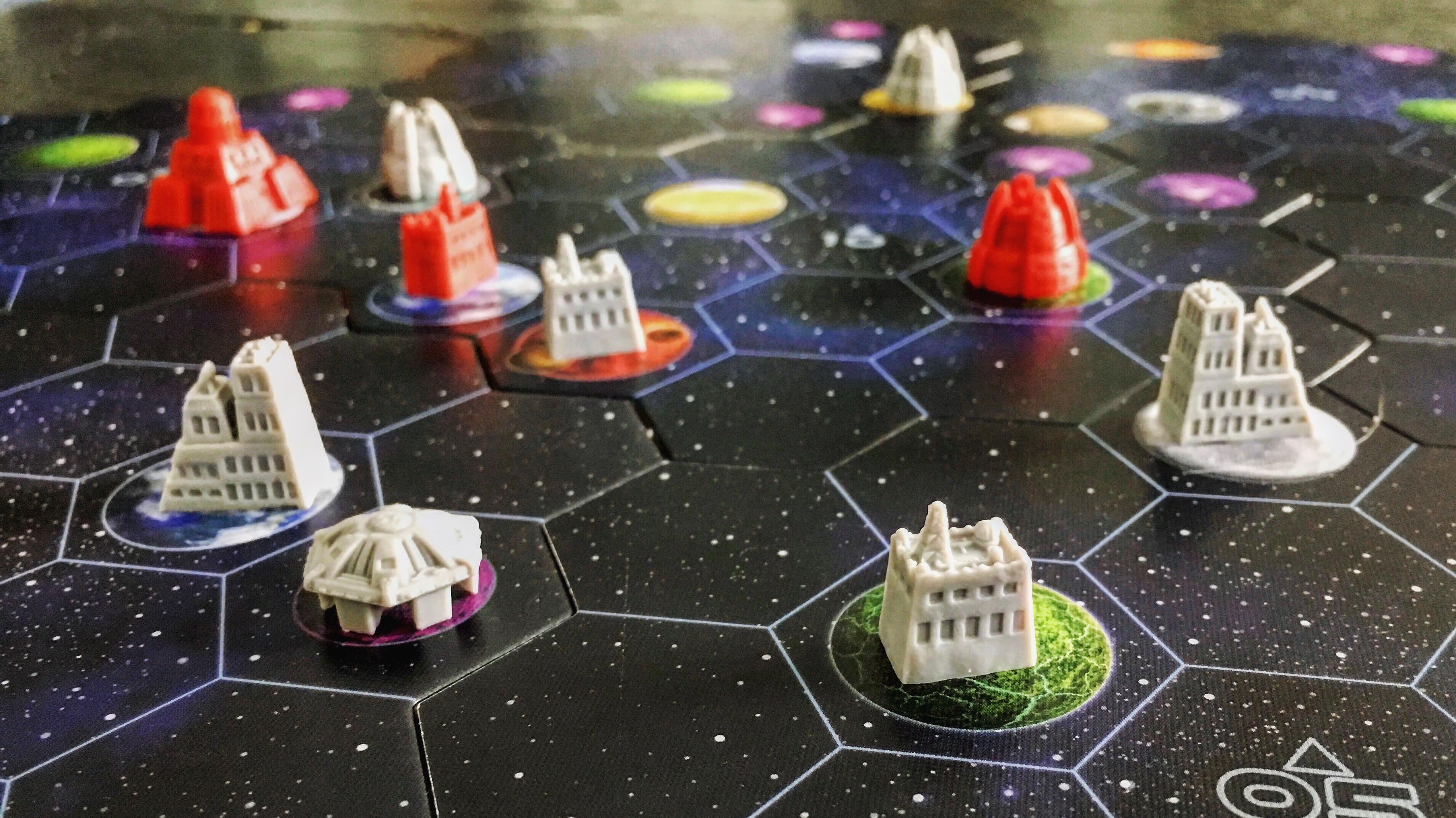 In terms of the quality of all components, I have no problem with the game. All the boards are made of quite thick and hard cardboard.

Most doubts will probably be raised by plastic buildings, which we can build on our planets. They are made of very thick plastic and seem to be very durable. Unfortunately, the buildings are quite simple and do not have a high level of detail. Do not expect that you will get intricately designed, unique, fancy figurines.  All buildings are common to all 14 races, they differ only in color. It is a pity that the creators decided not to invest more in this element, but on the other hand, it seems that these “bulbous” buildings fit into this specific graphic style of the game. 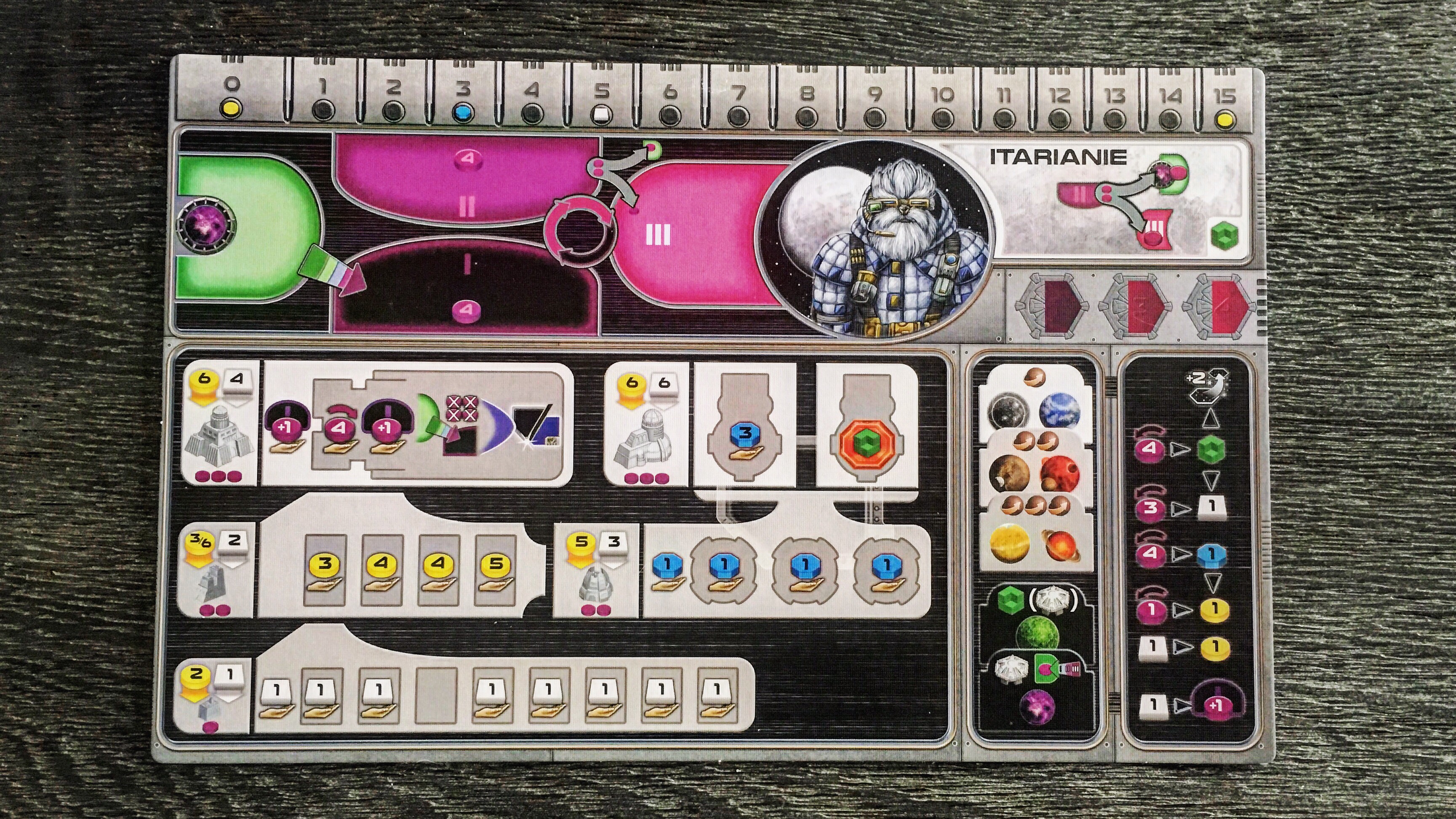 That’s right… style. I hesitated for a long time what to write, but I think I have to admit honestly that this game is ugly (compared to other modern titles). The most beautiful elements of the game are its cover box and images of the representatives of the factions (probably). The Gaia Project is (un)fortunately in the style of arcade computer games/machines from the turn of the 80’s/90’s. Representatives of the factions look like characters taken alive from drawn, 8bit point&click adventures. It’s not a style that will appeal to everyone, I think it won’t necessarily appeal to young players. I grew up on games from those times and this graphic style (figurines too) is a nostalgic return to childhood. So I want to say that in my opinion, Gaia Project has phenomenal design and if this period is close to you, you will probably feel the magic of this title 😉 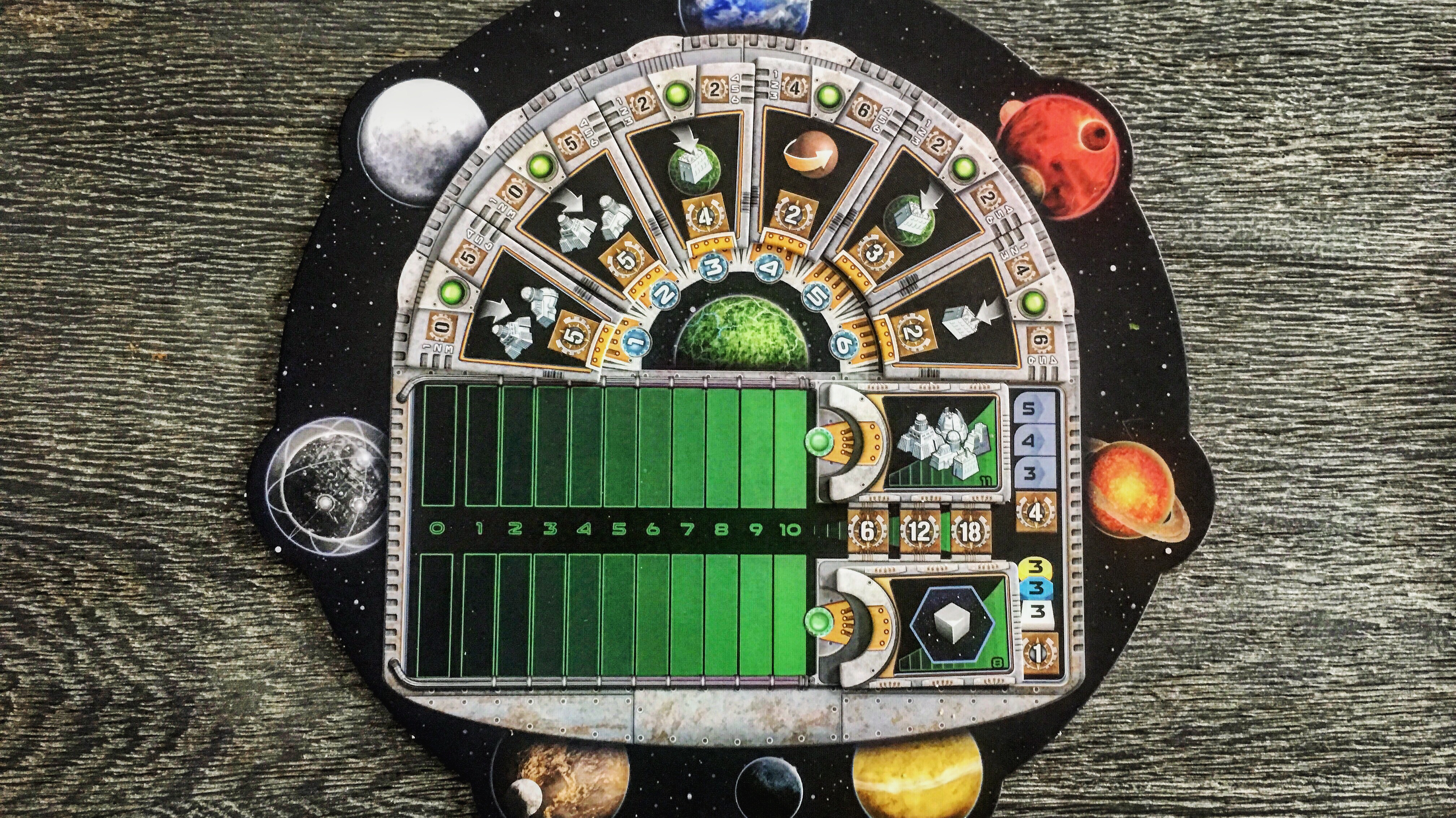 What I think is very important is the fact that the game is language-independent. We won’t find even half a word on the boards, and all skills and features are marked with symbols. Unfortunately, sometimes it is completely unknown what they are all about and we will often look to the manual. However, once we have mastered the symbols, we can enjoy the game without text 🙂 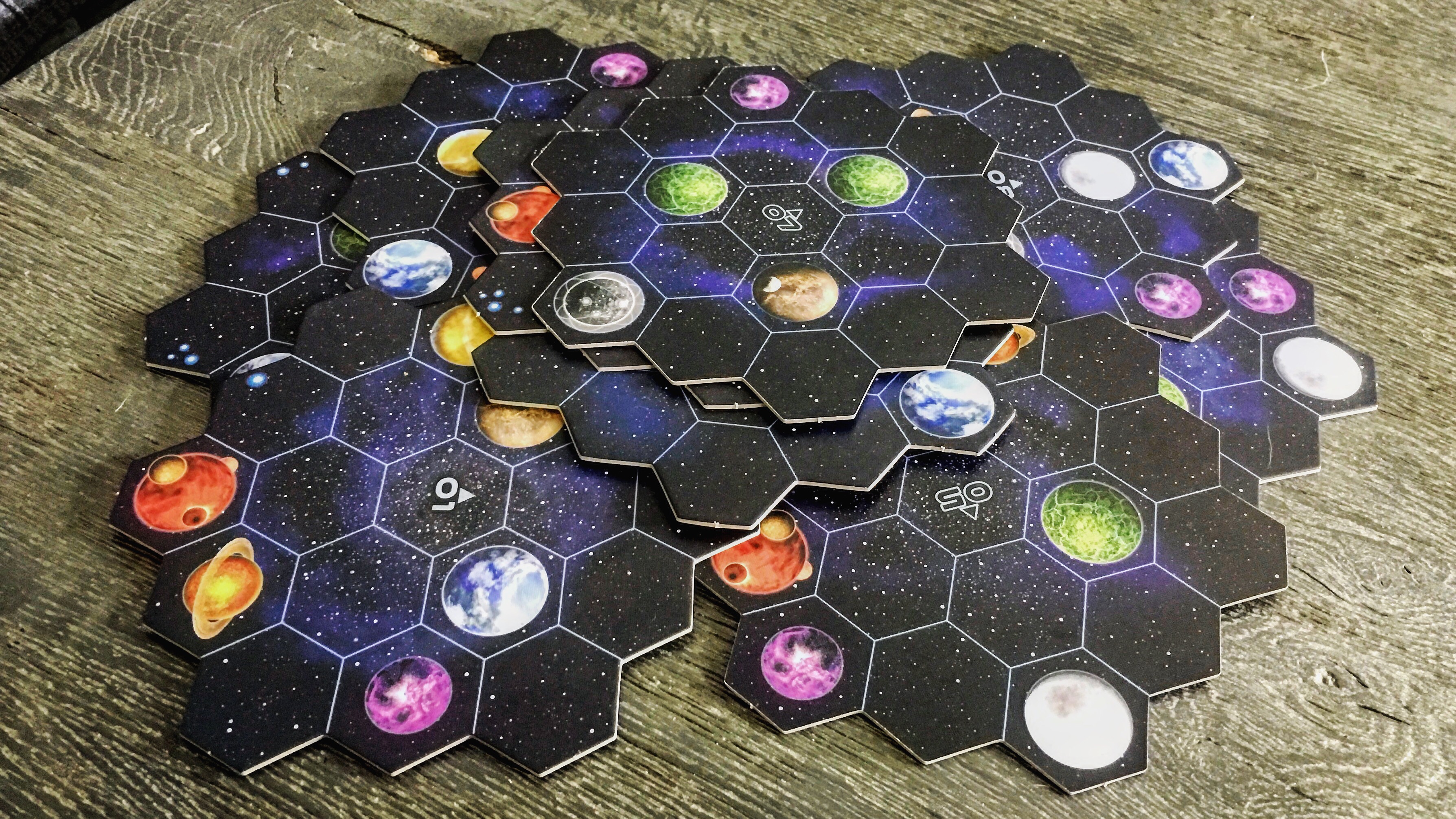 As I mentioned before, the main goal of the game is to dominate the galaxy, which we achieve by taking over planets, building outposts and making alliances. Players get their hands on a number of mechanics to lead them to victory. Below I will discuss only the basic ones, which will outline to you what this game is about.

Colonizing planets is a basic action, which, as the name suggests, allows you to build a mine on the planet (the most basic building). Interestingly, planets are divided into different types (7 in total) and depending on which faction we play, some planets will be easier for us to colonize, while others will be more difficult. What is connected with it? Higher or lower cost for colonization.

Another action is the process of Gaiaformation. There is one unique type of planet in the game – transplanets. It is a unique planet, which must be transformed into a Gaia planet before colonization. We can do it by starting the title Gaia Project, i.e. sending Gaiaformer on a transplanet, which in one round will turn it into a green and vibrant green planet.

Building and improving buildings unlocks various resources on the players’ boards, which we will obtain in the production round. There are only 4 types of resources, but their production is so limited that you will be wondering for a long time what is worth building and what is not.

Progress on the development tracks. There are six tracks. One is responsible for reducing the cost of colonizing planets, another one gives permanent bonuses in the production phase, another one increases the range of our faction, so that we can easily get to distant planets, etc. How to develop, which way to go?  Believe me, you will think long and hard about it 🙂 Why? The production of science points is slow at the beginning, and the benefits of all the tracks are huge 🙂

The last main mechanic is the possibility to make alliances. Players can link several of their planets in an alliance (fulfilling a certain condition), which allows them to get valuable alliance tokens that give huge bonuses in resources and points. 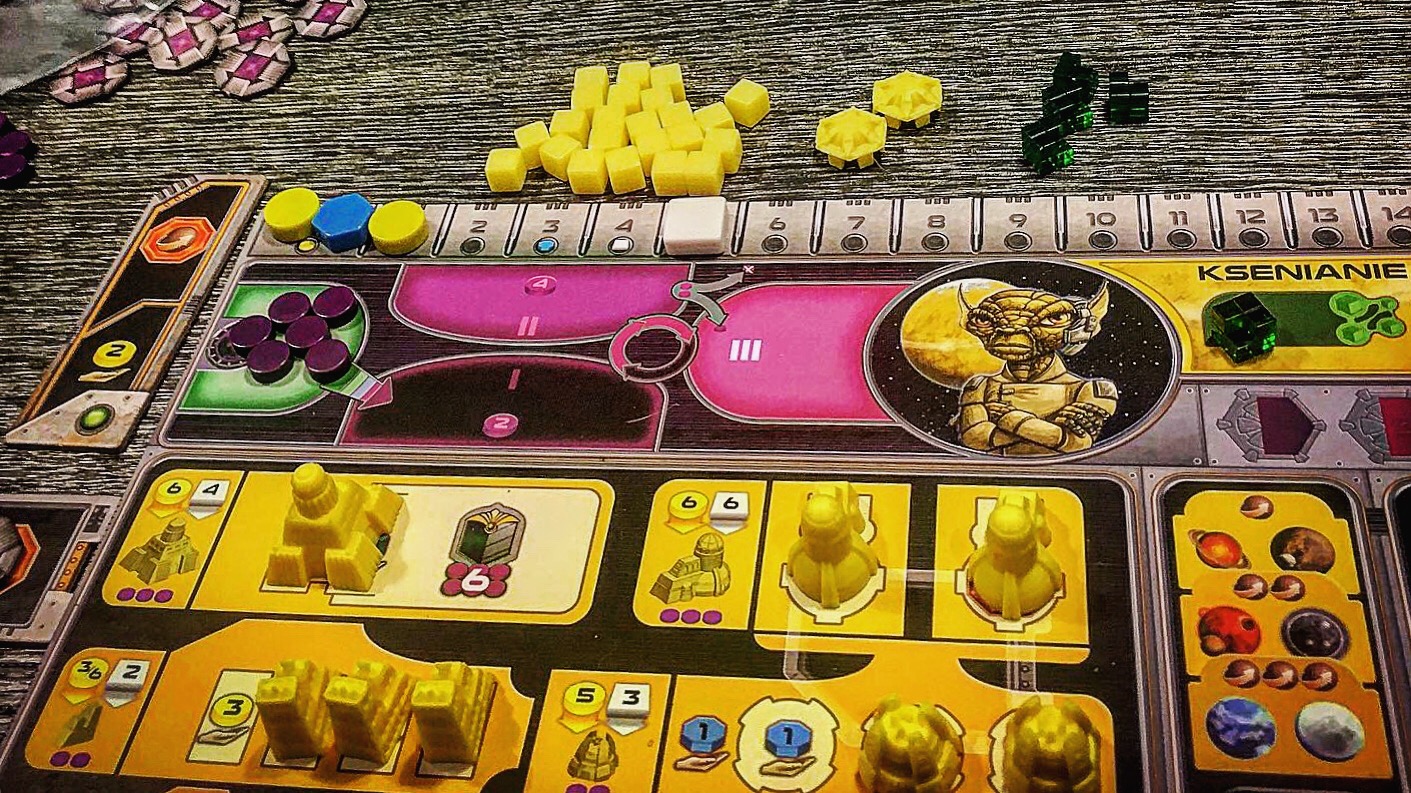 The Gaia Project is a monster and does not forgive mistakes. This game requires planning, planning and replanning. It is best to plan 5 turns ahead. Any mistakes will haunt you for a long time to come. Resources are running out very quickly and you will only get another one in the next round. It is worth noting that there are only 6 rounds in the game, so you will want to squeeze as much as possible out of each of them.

Players alternate one action at a time until each pass. Then they also move on to the next round of the game, previously producing their resources.

But how to win? The game has its own scoring board, on which are placed, during the set-up, round scoring tokens (6 tokens for 6 rounds) and final scoring tokens (2). This means that from the very beginning of the game, everyone knows what the actions will be scored in each round. And so in the first round it may turn out that the most profitable way is to put the mines on the planets, in the second round the progress on the development tracks, in the third round the improvement of buildings and so on, and so on, and so on. 2 final scoring tokens indicate 2 global goals. Whoever better meets these goals will earn more points (e.g. players can race to see who will colonize more types of planets or who will have at least one planet colonized in each sector). It is thanks to the Planning Board the game forces you to plan your moves far ahead, beyond the current round.

Unfortunately, there will be no interaction between players in the game. The only thing that occurs is “stealing” the planets and possibly stealing the action (in the game there is a pool of common actions that can be done once a round). For people who are looking for interaction this is definitely bad news. I also prefer to play games with interaction, but I must admit that the Gaia Project is such a difficult and engaging title that any negative interaction could complicate the game even further and make it extremely frustrating and even non playable. 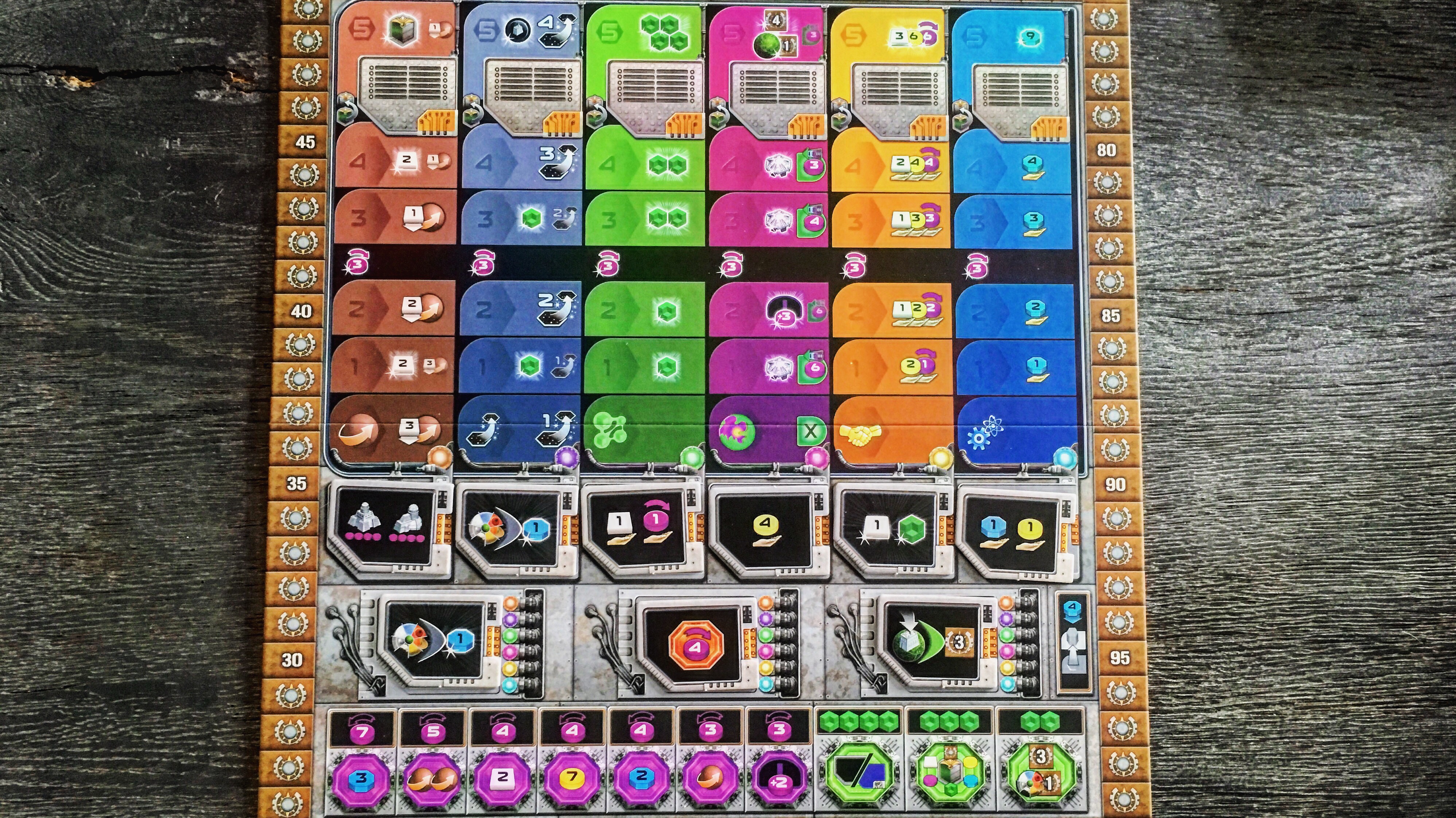 The game seems to be extremely replayable. The main board is built randomly from tiles, so the galactic arrangement in which we will have to play can be different each time. In addition, randomly drawn scoring tokens determine our style of play. If you add 14 different factions to all this, each with different skills, then you get a very complex and still extremely balanced game (I don’t know how they did it… :)).

Like I said before. I think that if you are a person who grew up on video games from the turn of the 80’s/90’s you will love this strange graphic style of the game and specific images of the representatives of the factions. It won’t bother you that the creators didn’t try to get any fictional set in the game.

The rest of them… well. You will get a slightly generic, indeterminate si-fi game with weird graphic design, which definitely stands out from the standards of modern games on this price level. I think it’s worth giving game a chance, maybe you’ll find beauty in her oldschool style. 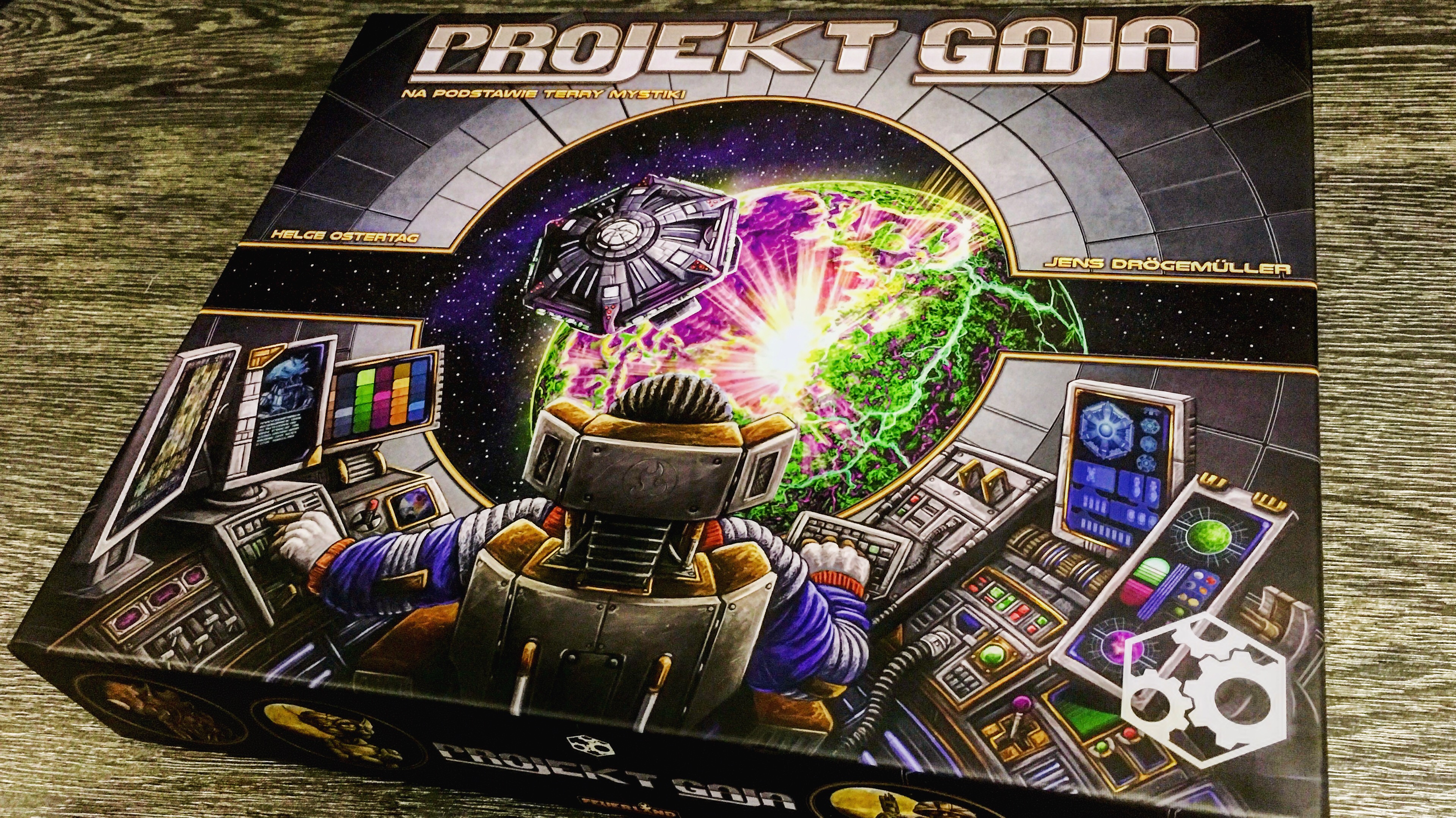 The game is hellishly difficult, but it is also hellishly rewarding. There are games that forgive you a lot, where you can make mistakes and they will be forgiven. Here every mistake can cost you a lot, but when you start to notice that your actions make sense, that the strategy you have chosen works, you will feel like real conquerors of space.

The price may seem a little too high, especially if you are distanced by graphics. I bought it in a huge promotion, but now I think it’s worth it. All components are well made, seem durable and most of all – there is a lot of it in the box. And the satisfaction provided by this game is priceless 😉 The Gaia project is definitely a heavy title, designed for hardcore players, so if you want a lightweight game, it’s not the best pick… but if you love to plan, plan and plan, you have to have this game. Its high position in the BGG ranking is fully justified.