We’ve been playing classic Aeon’s End a lot, and despite its flaws (rather minor ones), this game is one of our favorite card games ever. That’s why we didn’t hold back long before we bought a legacy version. We’ve finished the whole campaign in the first attempt, sitting at the table for almost 8 hours. Is it worth purchasing if you have a classic version? You never played Aeon’s End game before and you are not sure you should start with Legacy? Answers for that are below.

The theme is exactly the same as in the original Aeon’s End, you are breach mages, trying to protect Gravehold, the last stronghold of humanity, before the horrible threat from Nameless – creatures coming out from the void behind breaches. All of it served in both sci-fi and fantasy styles.

Legacy introduces the storyline, which tries to explain the existence and presence of Nameless, tells more about breaches, mages, and the presented world. You start as a young apprentice who wants to become a true breach mage and the next events speed up your education greatly. How did it work out? The story is super basic and very, very predictable, Pandemic Legacy had much more turns, and twists and some of them were surprising. You can feel that Aeon’s End: Legacy plot is here mostly to justify the next battles.

From Wikipedia: a legacy game is a variant of tabletop board games in which the game itself is designed, through various mechanics, to change permanently throughout a series of sessions.

But guess what? The basic and predictable story can be also entertaining, and that’s the case here. Finally, you can get to know some stories behind Brama, Mist and other heroes from the classic Aeon’s End. Even if you can easily guess the ending after the first chapter, you are still going to enjoy some smaller moments. Everything here is flat but you are still cheering for favorite heroes and you going to excited easily. 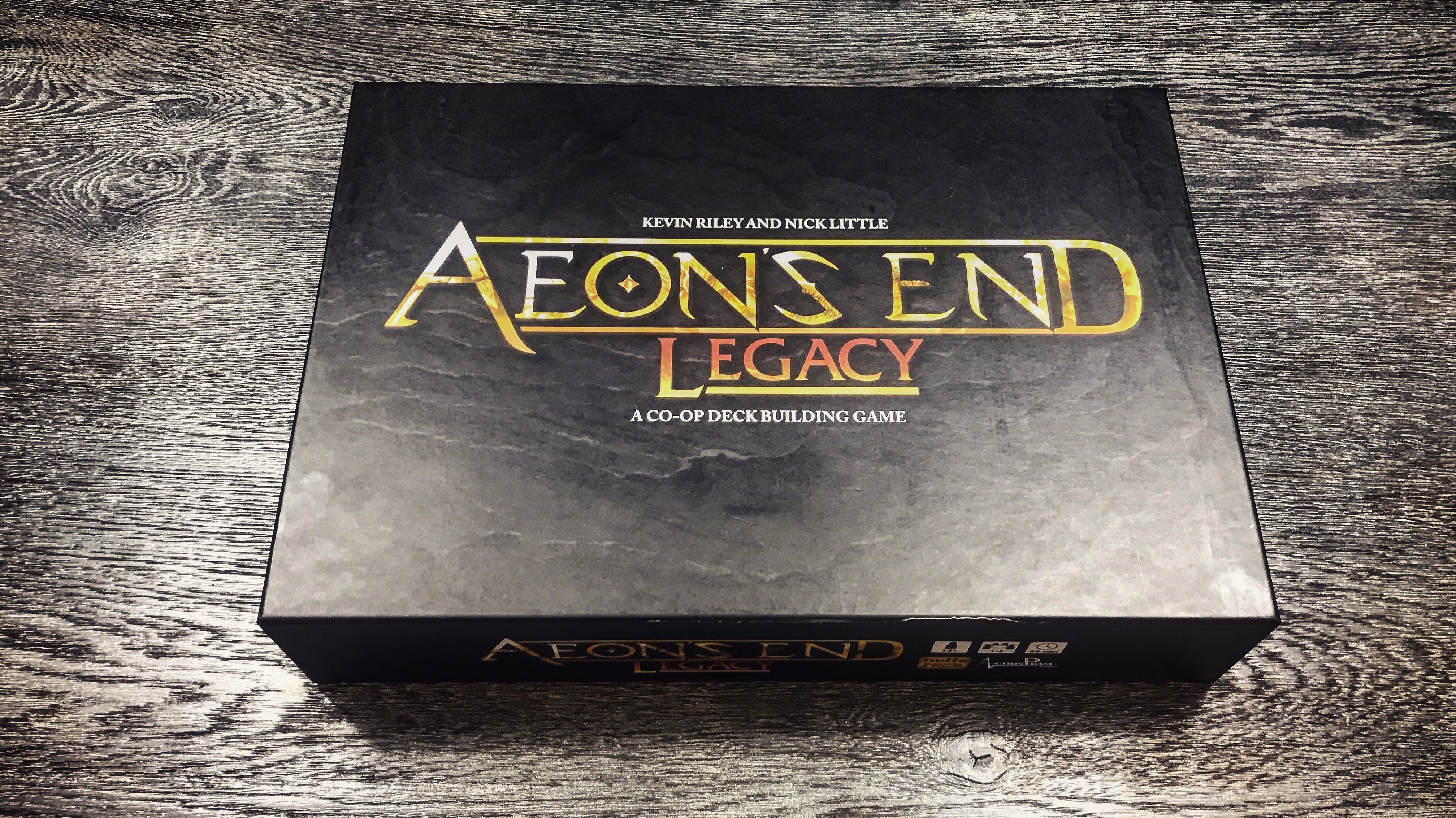 Maybe the storyline wasn’t surprising, but the box content is. You find of course many new spells, artifacts, gems, and Nemeses but you can also expect a lot of stuff introducing an entirely new mechanics to the game! It’s a legacy game, so most of the content you gonna open during gameplay, so I’m gonna skip it to avoid spoilers.

Besides that open box welcomes you with four new mages you can name by yourself and customize their skills during the campaign. Yes, you can build your own breach mage, and wait for it… you can use him/her in the classic Aeon’s End too! Up to this, you gonna find cards with a story written on them, a new manual, which changes during gameplay (same as in Pandemic Legacy) plus even more cards with content I don’t want to spoiler.

All content materials have good quality plus bosses’ sheets are very thick and it’s a pure pleasure to touch them and lay them down on the table. Graphics are ok, they have the same level as in non-legacy AE plus game creators finally gave up varnishing some fragments of graphics (such as magicians silhouette in the basic AE).

Unfortunately, both blue and red player has bugs printed on their sheets. They don’t influence gameplay at all, but they are quite disappointing – you will understand why in the middle of the campaign;-)

Manual is written very clear, set-up is really quick, so there are no obstacles for newbies in Aeon’s End universe. The core game constitutes an old and successful mechanic from the basic game. Although it’s the next deck-building game, it has some unique features. The biggest innovation of Aeon’s End in the deck-building category is the lack of shuffling discarded cards.

Here all discarded cards should be placed face-up on the pile in the order you have used/bought them. You can’t shuffle the pile, instead of it, if your hand is empty, you flip down discarded pile and put it as a pile of available cards. This solution provides an extra level of strategy and planning. Days of randomly drawn cards are over. You can remember which cards will be next in your hand so you can perform possible actions in a specific order, that will be more favorable to you during your future turns. Plus you will gain special cards and skills messing with those rules, giving you even more options and ways to play.

Apart from your mages and enemies HP counter, you have also HP counter for Gravehold, the last human stronghold. You will lose the game every time Gravehold is destroyed. Breach mages cannot die, when their HP drops down to zero or below, they become exhausted instead, which means many nasty things and obstacles for your team. The worst one is that any time exhausted mage should receive more damage, this damage is assigned to Gravehold.

But breach mage has a lot of options to defend and fightback:

Legacy introduces many new, very nice mechanics, mixing very well with the old ones. Below their description, but watch out – all of it will be unlocked during the campaign, so skip this fragment if you want to avoid spoilers.

Many cards and minions can evolve during the game and it’s up to you if you let your enemies become much stronger. How does it work? If the card has an “evolve” keyword and this card is activated, you have two options, you can meet conditions (sometimes hard) required to stop the card from evolving or let it do it. If “evolve” is written on the minion card, you have to kill it before “evolve key” word activate.

With every “evolve” you have to stick a sticker. If there is no place for the next stickers and key-work is activated again, then this card is replaced with an evolved version.

The monster can get a shield token. With one attack, no matter how many damages it can make, you are discarding one shield token. It can be annoying by the end of the fight when you have strong skills in your hand, but you have to waste them on enemies shield, so planning ahead is needed here.

Some cards ask you to write on the name of one of the players. In the future, every time this card shows up, it will affect this one specific player, and trust us, it will affect always in a bad way:-)

One Nameless has the power to corrupt some of your gems for the rest of the campaign. The corrupted gem cannot be used to acquire spells from the pool, so watch out for it!

Yeap, enemies learn how to degrade your cards. If you have become the target of degradation, you have to replace the card of the given cost (e.x. 3 aethers) with a card of the same type but lower cost from the pool. If you can’t do this, you suffer damage.

Some cards allow you to accumulate pulse tokens (up to 5), which can be used to enhance some spells. 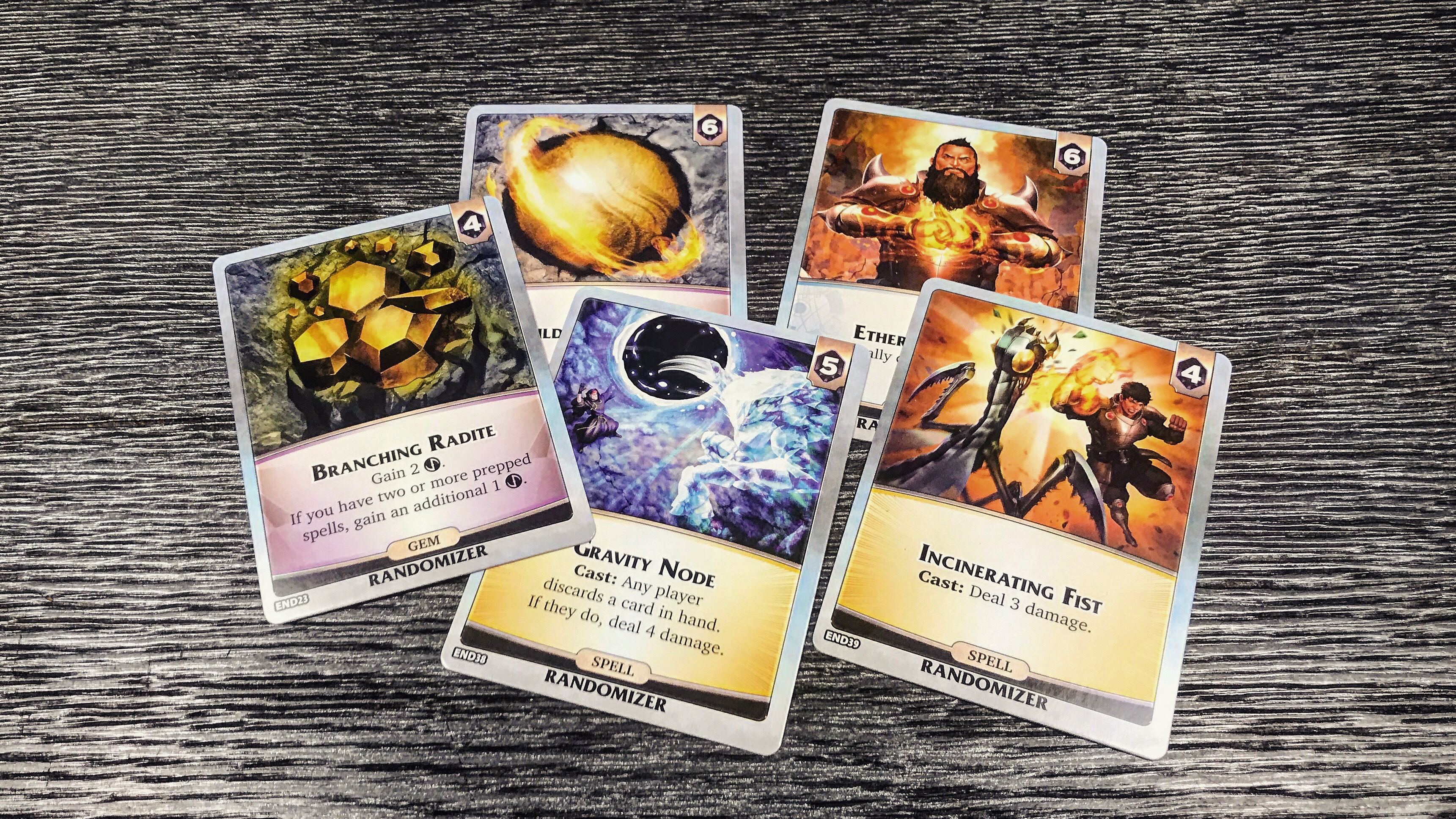 You start from picking one of four young breach mages. For now, it’s just a cosmetic choice, each sheet is the same at the beginning and the difference is how your mage looks (every mage has both male and female version). You can name him/her, and start your adventure. You gonna read cards with the story as long as the game doesn’t tell you to open one of the closed boxes, and then depending on what you open, you can find:

The fight has the same flow you can know from the basic game (+ new mechanics to unlock and unique things related to specific Nameless). 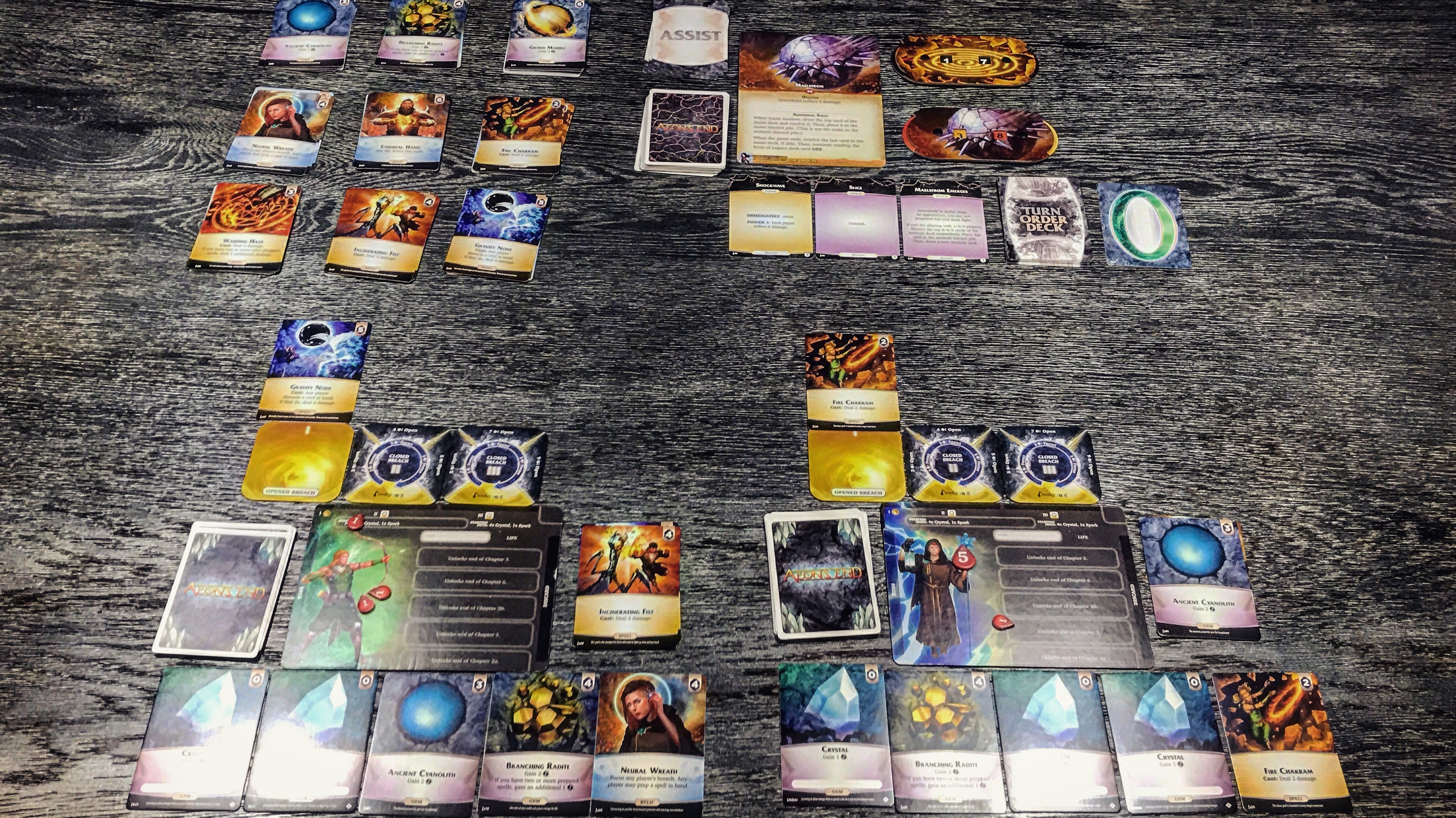 New skills and cards brought much more interaction and a lot of new combos possibilities between players. Every new chapter brings something new for your mages and next cards to the pool giving the possibility of new tactics. With everything unlocked you will realize that you have an endless amount of play styles you can master. The interaction element really shines with new custom mages. 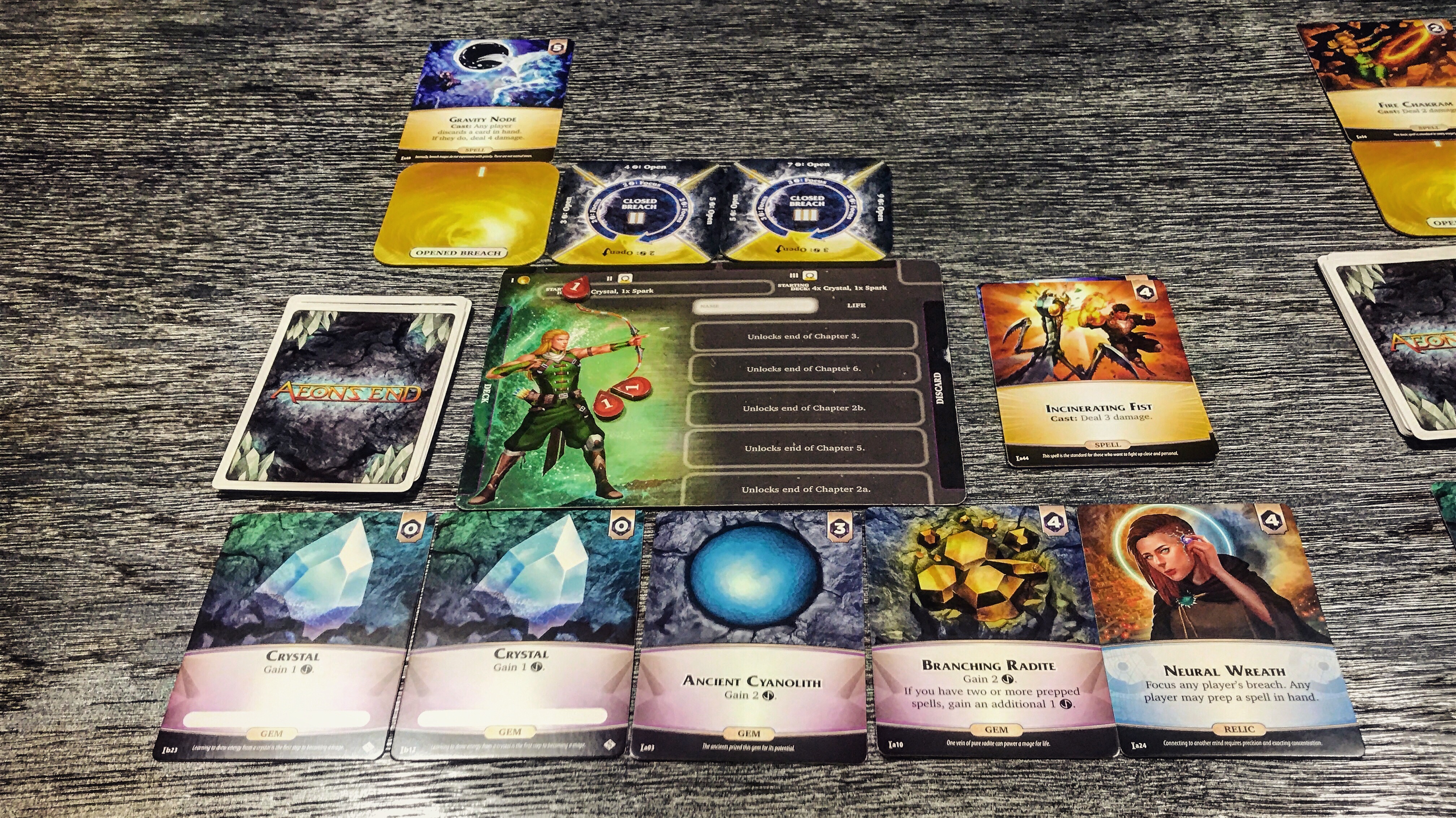 Normally this paragraph should be removed from the legacy type of game, but surprisingly Aeon’s End: Legacy provides almost full replayability. Every chapter can be played again with new, unlocked cards or skills (or even content from classic Aeon’s End and it works both ways!) – the game supports playing with earlier nemeses by guiding you which card is too powerful for this chapter, etc. giving you extra difficulty levels. We’ve forgotten to say there are different difficulties? Yeap, you can fight with every Nemesis on standard difficulty, or if you are Aeon’s End Veteran you can choose a harder level.

Nameless attacks and minions can differ in each fight, this plus turn order are the only random things here. 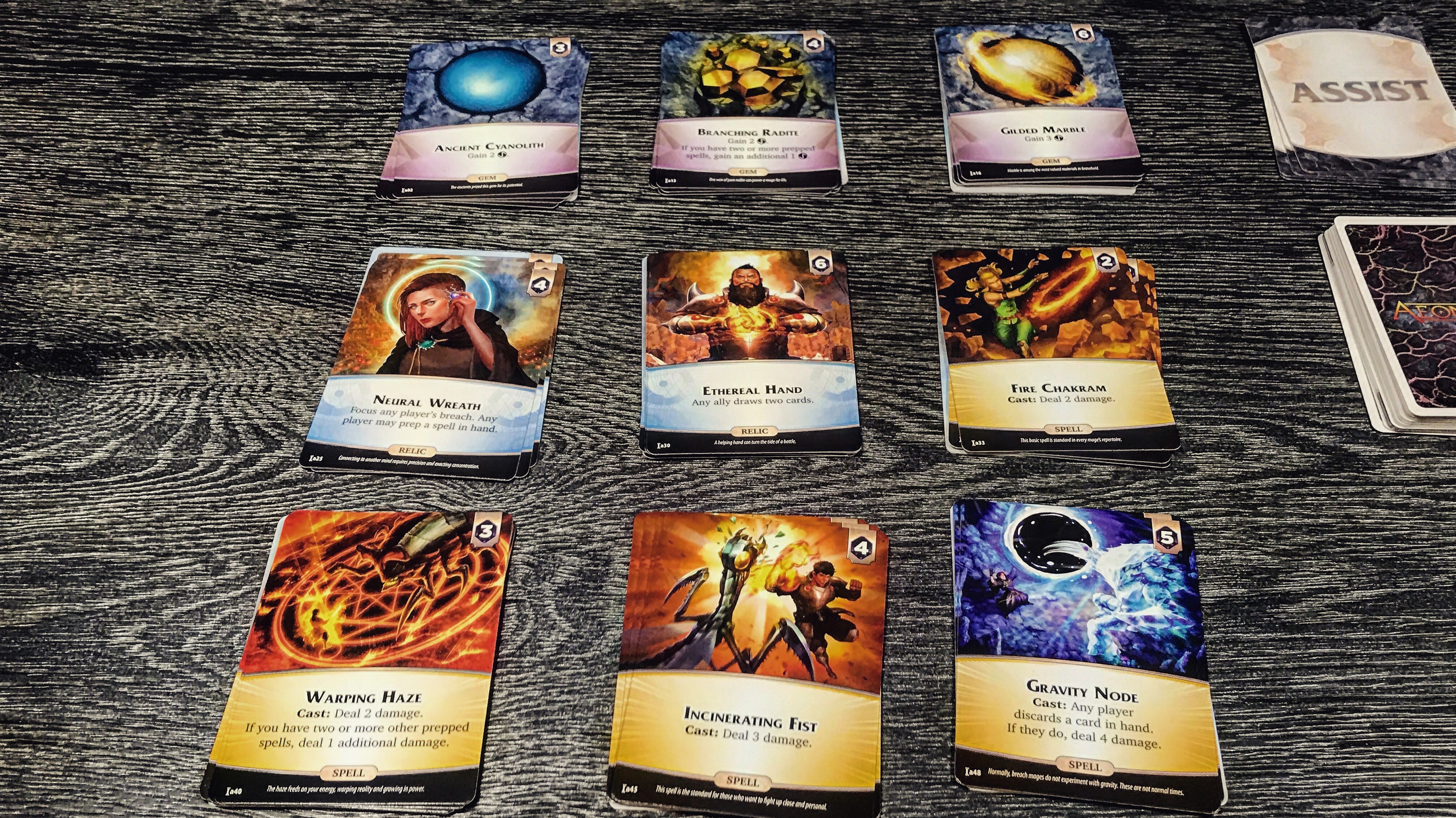 It’s definitely easier to get into the world of breach mages when you can create your own hero and you finally get some story behind Nameless, Gravehold, Brama, Mist, and others. Small/moderate immersion is the main flaw of classic Aeon’s End for us, and here, in Legacy, it is much better. But still, we expect to immerse with any legacy title much more. Aeon’s End universe has great potential, but it’s still unused. 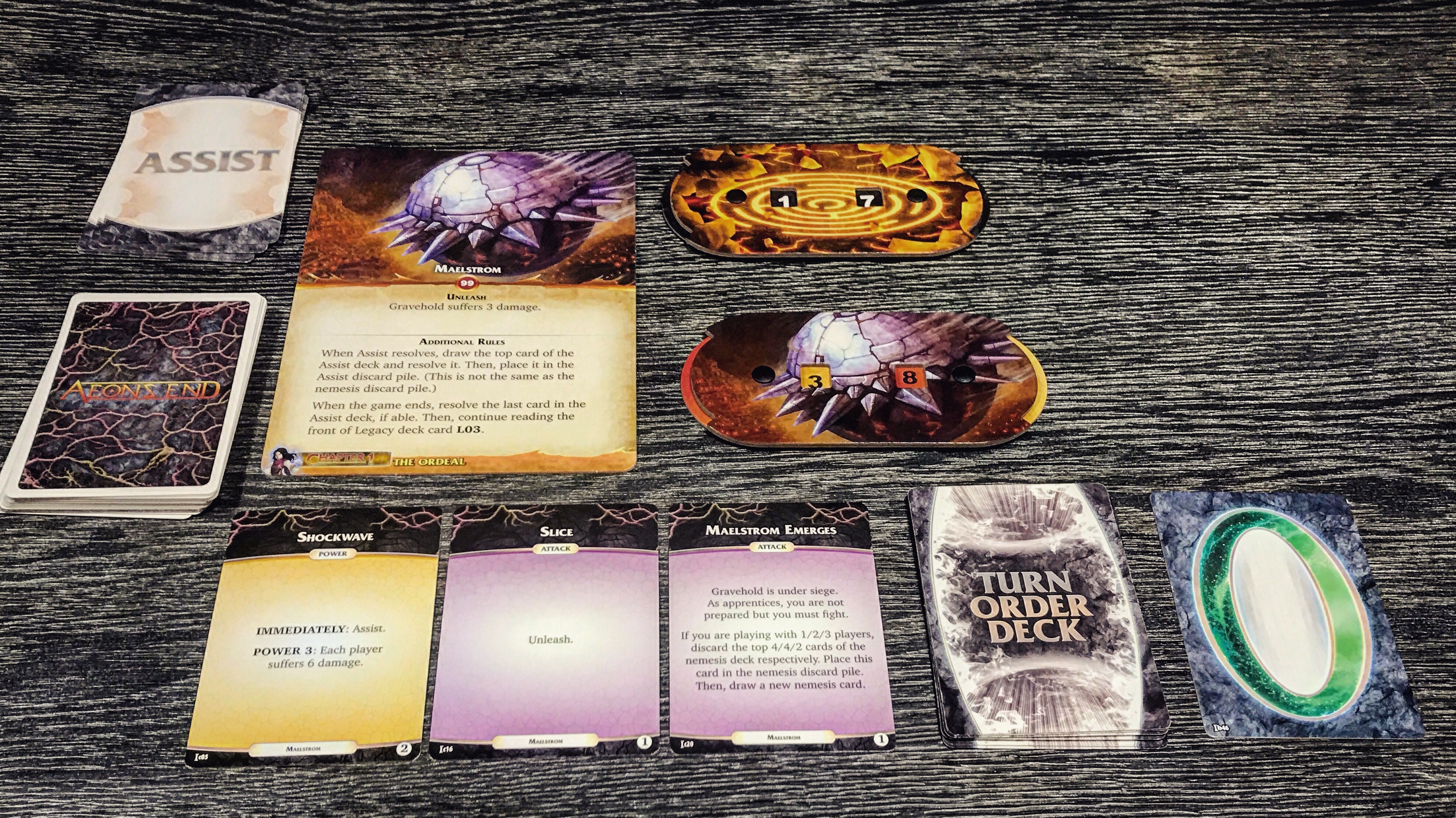 We’re Aeon’s End fans, so for us having fun from playing the legacy version was obvious. Moreover, we’ve enjoyed it so much, we finished the whole campaign at our first attempt, we sat at the table around 11 AM, and we beat the final Nemesis around 7 PM!

We’ve played all chapters with Greg’s sister- it was her first time with the Aeon’s End universe, but she enjoyed the game also a lot. Creating and growing own mage it’s a bull’s eye which can convince even the most reluctant. Plus game is easy and quick to learn, new players can fully focus on enjoying battles, without fighting with manual and twisted rules. 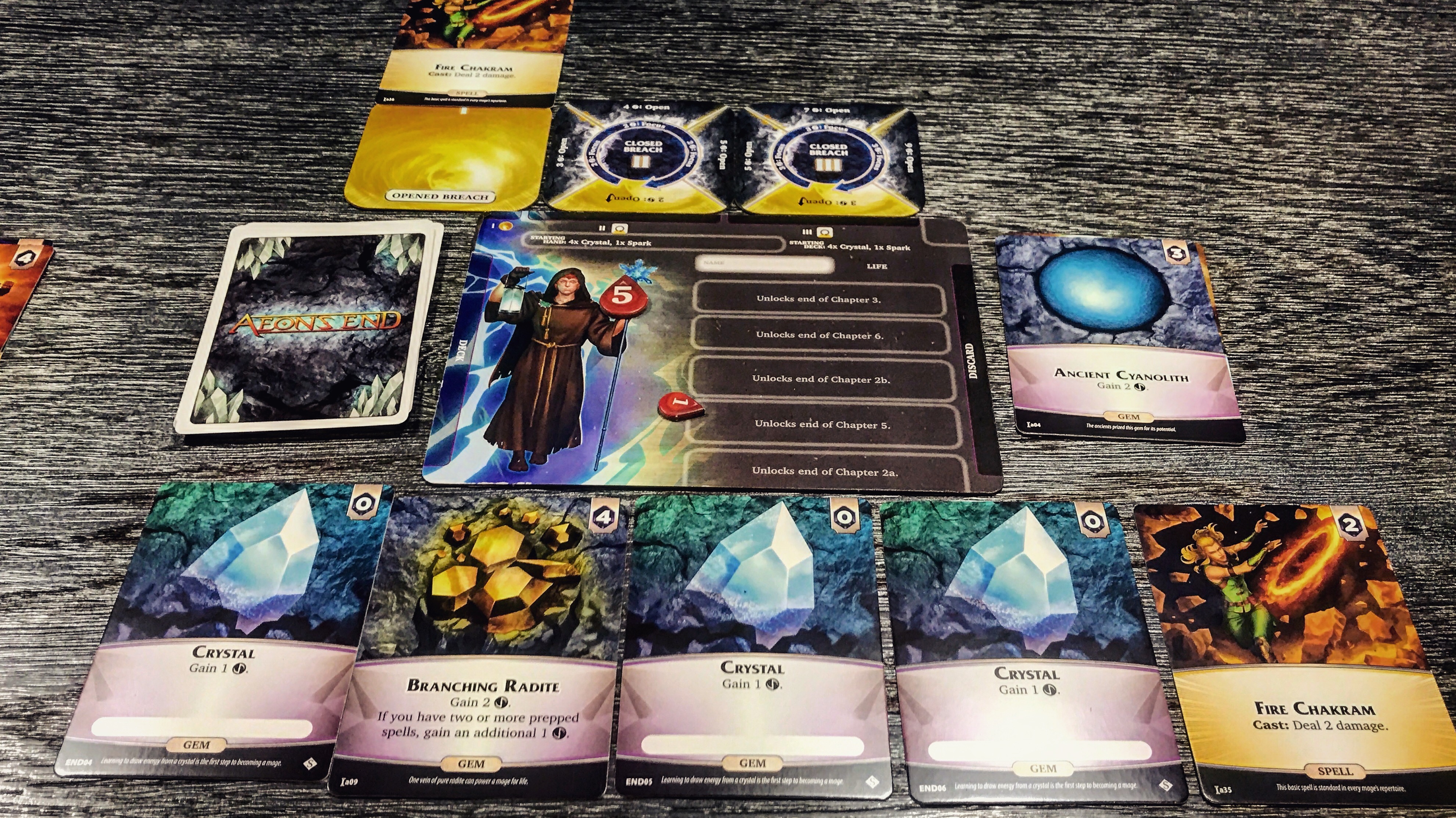 Kickstarter’s 65 euro for a game without any minis and plastic elements sounds expensive, especially for a legacy “one-time” game with 8 hours length campaign. But as mentioned before, replayability is very high, and almost all game elements mix with classic game. If you have a previous game or you are open to buying it, then price shouldn’t’ scare you away. 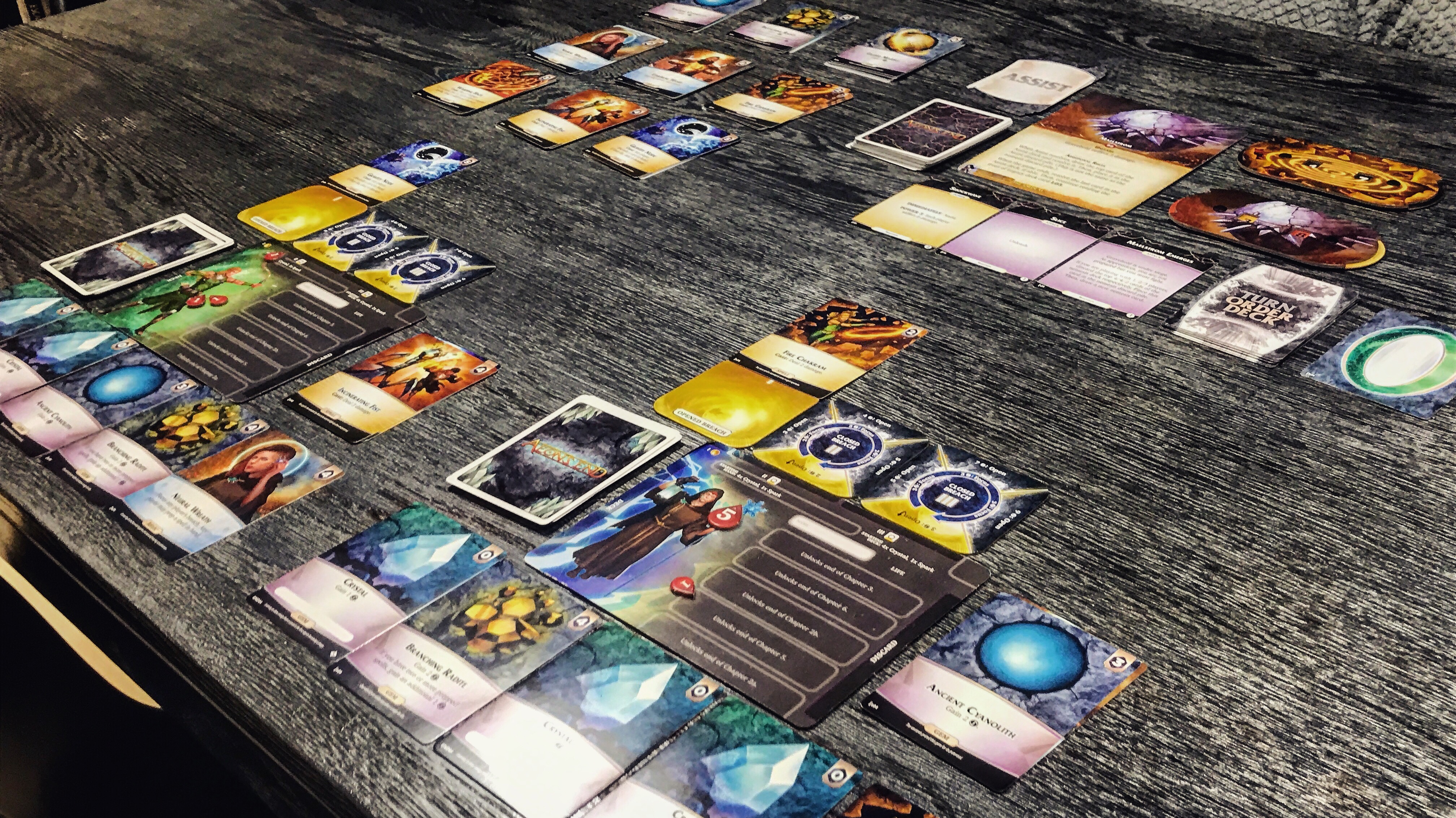 For every Aeon’s End fan, the legacy version is a mandatory purchase. If this is your first time with AE universe you can easily start with Legacy, but if you are not sure about this choice or you are not into card games in general, then consider buying basic Aeon’s End first.