How does the dragon sculpting process look alike? Check Behind the scenes footage from Clayton Machado, former architect, now Dragori Games Co-Owner and Director of Miniatures (what an awesome job name!).

Years of experience with Architecture, with a great understanding of the perspective and proportions of renders, were a natural base for miniature sculpting. That’s why, when we started the Arena The Contest project years ago, it was up to me to materialize our ideas into miniatures. So, what does the sculpting process look like? The first step is to work with the concept of the character that will be represented on a miniature, and as the effect of this step, achieve a blueprint. Without it work is more difficult since we have to work piece by piece together with the team, working out its proportions.

With that in mind, when you asked me to explain how a miniature is made from scratch I decided to share with you the process of creating our Elder Dragon, both because it is one of our most emblematic and desired miniatures from the beginning of our trajectory, but also because of the wealth that was his creative process. Back then, when we were developing Arena,  we already had a miniature that represented all the possible dragon bosses from the core box, but we urged for more, for a miniature that better expressed the one in our art cover, and that was how our emblematic Elder Dragon was born.  And here the very first sketch: Besides having a strong technical base, it’s vital for a sculptor to be always attuned to new releases, looking for new solutions, always having at hand a vast and updated library of references, even those that are not from games. For example, I am always following launches from companies like Iron Studios and Kotobukiya and studying their solutions to convey movement, textures, and grandeur in an immobile figure.

Another tip, that I always say to those who are starting with sculpting is, is to avoid working with different colors on the same model from the start as they create a false sense of the difference between the parts of the model, hiding the need for differentiation of textures and volumetry. Sketch Views like this are important as well, to work with different possible angles and proportions of the pieces, so don’t ignore them: With the Elder Dragon I sought references in more modern takes of classic dragons, able to convey the whole idea of ​​its power in just one image. I was using arts done for Dungeons & Dragons and Magic The Gathering, both for reference and to create differentiations that would make ours unique. As a result, I came with this first finalized proposal: During the sculpting process, it is important to always be open to changes, adapting the initial idea to the production of renders and these to your production capacity, not the other way around. With a new pose proposal, we solve the limitations given by the maximum possible size for the miniature base, also the dragon becomes a “Wyvern”, losing the two front arms, distancing itself from previous version significant. I focused much more on the face as well. After a few more tweaks, where correcting the size of the stone on which the dragon stands, we give the miniature more stability and grandiosity, harmonizing the perceived proportion without changing the size of the base. Smart solutions, creating an element of transition. Now, with the design finished and approved, we can move on to the digital modeling phase. First try out approved, yet without details like the wings. At this stage it is also important to have the different views of the model. Another tip: if you are not the 3D sculptor, always keep in mind that it is efficient to follow this evolution frequently, even if it is through still-images, to have more assertiveness and avoid rework after the render is done, as it is one of the most time-consuming steps. Model Approved, we can proceed to the 360º view of the miniature, which allows a complete visualization to validate the concept and the final pose of the Dragon.

Marks indicate the areas needing improvement. Here we had to embody the Dragon leaving it most robust and imposing, enlargement of the head and trunk and thickening of the neck. Note the importance of the final pose in a miniature, conveying the idea of ​​movement. Being a playable piece that must compose with what will occur on the board, we had the care with which the wings are open, generating the idea of asymmetry and movement in a static and symmetrical piece. The angle of the legs and the dynamic way in which the stones are accommodated, head tilted, mouth open and close to the ground, all added together, fulfills the intention of creating a dreadful miniature “in motion” and to be ready to attack the heroes nearby, once in the game.

After the previous notes, the model reached a satisfactory stage in terms of proportion, pose and shapes. But it still lacks details and textures.

It is very important to know that the quality of a finished model, far beyond its proportions, shape and pose, is directly linked to the wealth of details and textures, especially when there is no colour involved, only greyness of plastic. Last 360 º with details and final textures applied to the entire figure. Now approved, the rendering can be done safely. I reaffirm that the rendering should be done only after confirming all the modifications, thus avoiding rework, as we already know it is the stage of greatest time consumption.

In my opinion about the miniature making process, a thing that many artists do not pay attention to is to fully know, even before the beginning of the modeling, the limits of the physical production capacity you will have at your disposal, no matter if a 3D printer or a professional mass-production manufacturer, this is essential for anticipating issues and obtain solutions even during the modeling phase, therefore avoiding rework and increased costs as you already work with a proposal that you know will be feasible. In our example, the miniature would not fit the manufacturer’s standard box, so we developed a solution, taking into account that the increasing box size would not only increase the cost of production itself but worse, shipment costs and storage problems for our customers also. That’s how we came with the detachable wings solution: A final tip, especially for the less experienced, be aware of costs regarding the delivery of physical prototypes. You need them to ensure that you can precisely observe if your sculpt needs extra modifications regarding the manufacturer’s capabilities and limitations. Regular and close cooperation is the final key to achieve a desirable result. 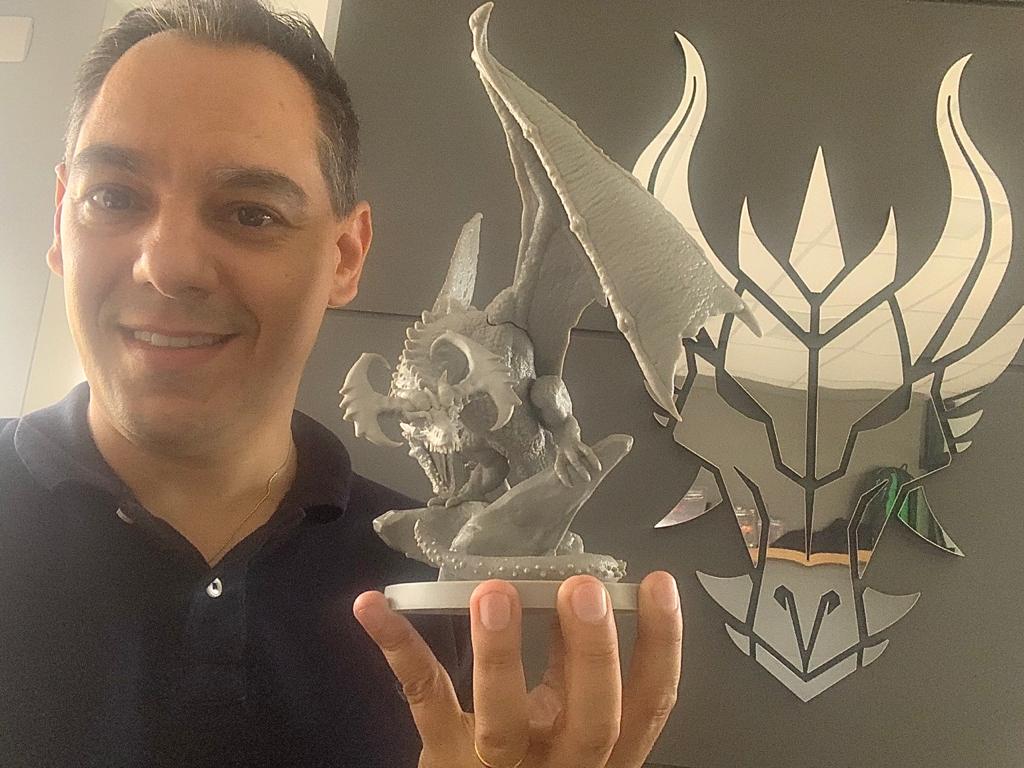 Finally at home! It was such an exhausting yet inc

We had an awesome meeting with our friends from @l

Our table by @rathskellers is already on Spiel 202